Treaty City Brewery, a Limerick-based artisan craft brewery, has opened a new micro-brewery as a unique tourist attraction in the heart of Limerick’s Medieval Quarter.

Two previously derelict buildings on Nicholas Street, with links to Limerick’s 18th century brewing industry, have been converted to offer what is being billed as ‘the ultimate craft brewing experience’.

Stephen Cunneen, Managing Director of Treaty City Brewery said: “Even though we are only open a few months, the business has been building week on week so we are very happy. It is so very nice to be located in the very soul of the city and we definitely feel the love coming from the Treaty City.

“To be completely honest, it has been quiet humbling to see how proud Limerick is of the brewery. I was in a café in the centre of town the other day and overheard a local recommending the Brewery to a group of tourists. She did not see me but I was delighted to get the unbiased review.”

The Treaty City micro-brewery will appeal to craft beer enthusiasts as well as the culturally curious. Through the craft brewing experience, visitors will discover Treaty City Brewery’s completely artisan hands-on brewing approach, while also learning about the history of the building and brewing in Limerick which dates back to the 1700s. “We are fast becoming an essential part of the must-do itinerary in the mid-west. Limerick tourist numbers are growing very fast and we are at the cusp of that wave. It helps that we have a very unique experience to offer,” said Stephen.

Treaty City Brewery’s ethos of authenticity and drive to support local produce and heritage has been evident since the foundation of the brewery with its naming of beers like Hellsgate Lager and Thomond Red Ale and its use of local ingredients whenever possible. This strong ethos continues to be evident in the new micro-brewery. 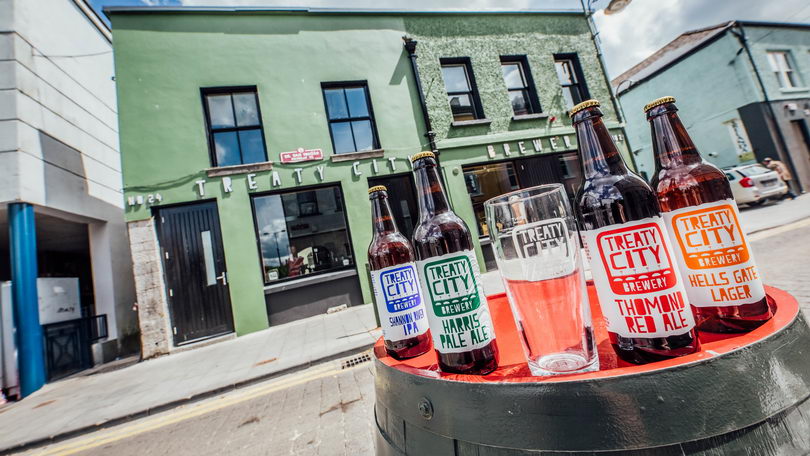 Stephen explained: “After a long night of general debauchery, plenty of merriment and many bottles of bland tasteless beer, we decided enough was enough. Something had to be done. Life was too short to drink bad beer. The next morning, while nursing a spectacular hangover, we headed for the local homebrew store and purchased our very first brewing equipment. When offered some advice by the owner, I duly recited the rich brewing history in Ireland and how it was engrained in our DNA. No instructions needed we declared and headed off with our new gear. After calling back later that day for the instructions we headed home to start on this incredible journey.

“The spare bedroom was quickly converted into a working brewery and we set about creating our very first beer. Harris Pale Ale was born after many exploding fermenters, boil overs, leaking mash tuns (I could go on it’s a long list). The recipe is still very similar today but we don’t brew on a hob in the kitchen anymore and instead of 20 litres we brew 3,000 litres each batch!

“Soon after our foray into the brewing world, our first child Cliodhna came along and our brewery was promptly converted into a nursery. It’s amazing the structural similarities between a baby’s nursery and a home brewery. With the new addition to the family and our own clan so far away we dully set our sights on the Emerald Isle. With a quick hop and a skip we were back in the Treaty City and ready for action.”

Treaty City Brewery was incorporated, labels were created, designs and reviews of everything from bottle caps to t-shirts. Stephen set to work, diligently tasting as many beers as he could (very hard work) and building the recipes for the iconic beers that are on the shelves today.

Treaty City Brewery was awarded the lease of 24 and 25 Nicholas Street as part of Limerick City and County Council’s strategy to revitalise Nicholas Street while preserving the built heritage in the area.

Stephen has seen a number of changes in Limerick’s business landscape in recent years. “We are on the up and up, with the recent announcements of the Ryder Cup and the Limerick 2030 Plan we can see a dramatic change in the outlook for the city. As the third biggest city in the Republic we have huge potential and with the planned redevelopment of the city centre and especially the Medieval Quarter, Treaty City Brewery is uniquely positioned to take advantage of this positive business environment.”

The brewery is open six days a week and tours run regularly throughout the day. Corporate groups, private beer tastings, food and beer pairings and special occasion events are also catered and are proving very popular.

Click here for more information about the brewery and the Ultimate Beer Craft Experience.