A key moment has been arrived at in the programme for transforming one of Limerick’s most iconic sites, the Opera Site, into the largest inner-city commercial development outside of Dublin with the submission of a planning application to An Bord Pleanála.

The magnificent state-of-the art project will be the most transformational development in this region for decades, capable of hosting up to 3,000 employees when fully developed, together with residential, retail, new plazas and bar/restaurant offerings.

The iconic site will be developed by Limerick Twenty Thirty DAC - a special purpose vehicle created by Limerick City and County Council in 2016 to transform a number of disused iconic sites in Limerick into catalysts for economic growth and job creation.

Limerick Twenty Thirty commenced the development in 2017 at the site, which stood half built for almost a decade after work had stalled midway during the economic crash.

Gardens International was finished to tenant fit-out stage, after an 18 month €17.6 million build. It is the first office space developed to the world-class LEED Gold standard that has come on the Limerick market.

The 1.62 hectare Opera Site is the largest project in the programme and will be developed over a six-year period at a total cost of circa €180 m. It is fully funded by the European Investment Bank and the Council of Europe Development Bank.

The site was acquired by Limerick City Council in 2011 after a previous plan to develop it collapsed during the crash. The project will be developed to LEED Gold and Nearly Zero Energy Building (NZEB) standards. It includes the restoration of a number of iconic buildings, not least the Revenue building. 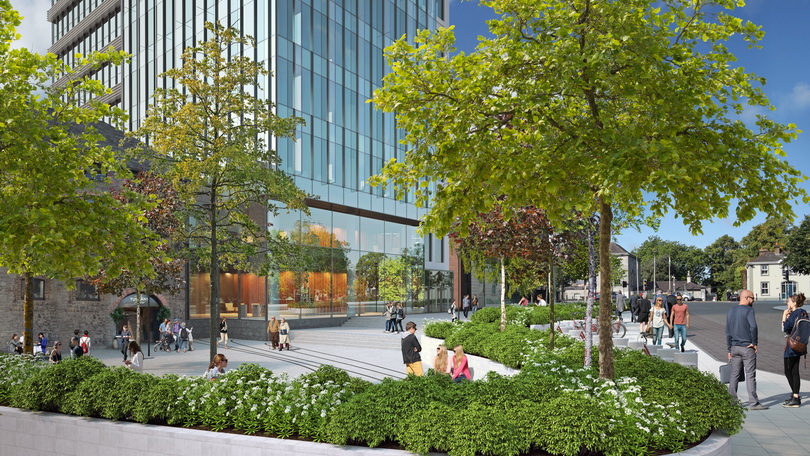 Mayor of the City and County of Limerick, Cllr. James Collins said the official opening of one iconic project and lodging of a planning application for another in the space of a week illustrates the momentum being gathered in the city.

“This is a new era for Limerick. When we initially embarked on this process it required vision and commitment. Today that is paying off.

“It is a hugely rewarding to see what has been achieved at Gardens International and as we look ahead to the development of the Opera Site it is a very exciting indeed.”

“We identified a number of key deliverables in that, including creating 12,000 jobs over the lifetime of the plan. We’ve already achieved that in Limerick in the five years since and Limerick Twenty Thirty is about ensuring we continue to build on that.

“With Gardens now complete and heading fast for full occupancy, we move onto the Opera site we’ve now also lodged a planning application on behalf of Limerick Twenty Thirty for Opera, which will be the single most important project for this region in decades and includes a number of iconic new buildings, not least the new Revenue building.”