Stories of bygone era and way of life to become part of Limerick’s Visual History as part of Creative Ireland programme.

The stories of families in Limerick who earned their living from fishing, mainly salmon, along the banks of the River Shannon, from the city to the estuary have been captured in a new film, The Estuary.

The traditional skill of reed cutting which was also practiced along the estuary by some of the fishermen has also been included in the film, which captures the very tough and often dangerous job these men encountered on a daily basis.

The film which has been funded as part of the Creative Ireland programme grew out of another project by Limerick City and County Council in conjunction with Mary Immaculate College which captured the oral histories of the Shannon Fishermen and Reed Cutters.

The documentary features fishermen from along the Shannon who recount their experiences of fishing for a living along the Estuary.

They belonged to one of four distinct groupings, which shared the river for the most part fairly amicably.

Limerick has a long fishing tradition and a unique relationship with the River Shannon from Doonass down to Scattery Island. 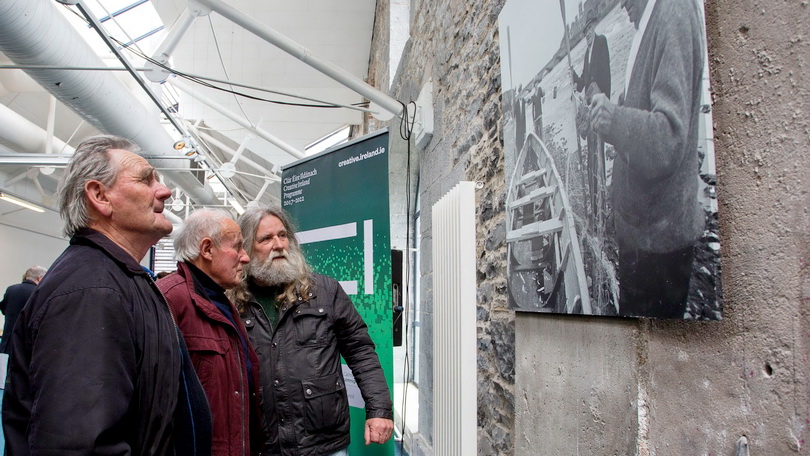 Ardnacrusha disrupted this way of life when the hydro-electric scheme altered the flow of the river. The tail race reduced the volume of water in the original course and when the turbines released flood water vast quantities were allowed to flow through the original channel. This meant the water was moving faster and it also changed the way the fish behaved.

Mayor of the City and County of Limerick, Cllr Stephen Keary said: “The traditional Shannon fishermen and reed cutters are dying away but this film will allow their stories to remain with us. Those who worked along the River Shannon have a story to tell that is unique to Limerick and this film will allow future historians and sociologists to get a glimpse, first had, of what it was like to fish the Shannon.”

Officially launching the documentary at Istabraq Hall in Limerick City and County Council’s Corporate Headquarters today (06 April 2018), Minister for Culture, Heritage and the Gaeltacht Josepha Madigan said: “I’m delighted to be in Limerick to launch this new documentary which has been created under the auspices of the Archives Department of Limerick City and County Council. The film tells the often challenging story that these fishermen and their families experienced throughout their lives.”

“The film clearly demonstrated and captures the passion these men held for the river and its ability to sustain livelihoods. It shines a light onto very tough times of the past, when fishing along the Shannon Estuary literally put food on the table, paid the bills and bought clothes.”

“I’m very happy that this invaluable film has been made possible by funding from Creative Ireland. The Creative Ireland programme is a very important all of government programme to ensure creativity in central to our lives and wellbeing. This project demonstrated the importance of both of these things.”

Jacqui Hayes, Archivist with Limerick City and County Council added: “Fishermen don't tend to create records and so this way of life doesn't leave behind a traditional archive and is in real danger of being forgotten. This documentary film captures this rich heritage for current and future generations and brings it to life through the voices of the fishermen telling their own story.”

“One of the benefits of having this documentary is its ability to bring to life the voices and experiences of individuals, many of whom might otherwise have been forgotten by history. Film also provides a level of accessibility to the past that is often missing from other forms of history.”

Sheila Deegan, Culture and Arts Officer with Limerick City and County Council said: “Film is such a great way of capturing the meaningful stories that tell us about who we are. The commissioned short documentary film as part of the Limerick Culture and Creativity Plan for Creative Ireland, has captured with empathy the history and heritage of the Shannon Fishermen and their families.”

The film ‘The Estuary’ can be viewed on Limerick.ie