Limerick City and County Council is delaying the start of its annual grass-cutting programme in certain areas in order to help to give bees and other pollinators an early food source. The Council signed a framework agreement with the All-Ireland Pollinator Plan to formalise its long term commitment to support pollinators in Limerick.

The plan is a cross-sector initiative, led by the National Biodiversity Data Centre, with local authorities, farmers, businesses, schools and local communities to support pollinators such as bees.

Ireland depends on pollinating insects to pollinate our crops, fruits and vegetables - but many pollinators are now threatened with extinction.

The species diversity in these areas was studied by Dr. Tom Harrington, botanist and all were found to have a range of plants of value to pollinators, in particular at Corbally Meadows.

In addition to the wild flower meadows, grass cutting will be delayed in a number of public areas to allow the dandelions to flower and provide an important early food source for pollinators.

These include Curraghgower Park, Arthur’s Quay Park and part of Mungret Park. 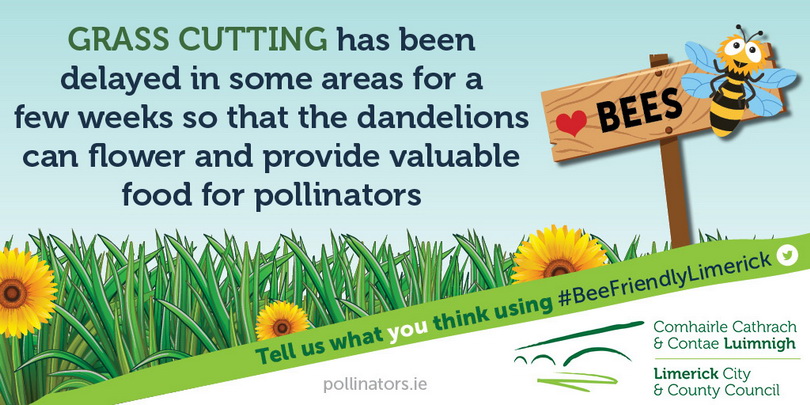 Mayor of the City and County of Limerick Cllr James Collins said: “It is very important that we care for our environment. Scientists have shown that Bees are crucial to maintaining crops. They are the world's most important pollinator of food crops. It is estimated that one third of the food that we consume each day relies on pollination mainly by bees, but also by other insects, birds and bats.”

“I’m delighted that Limerick City and County Council is taking this step not to cut the grass in certain areas to allow the bees pollinate.”

Limerick City and County Council has become one of the first local authorities in Ireland to officially partner with All-Ireland Pollinator Plan, leading the way in ‘pollinator protection’.

Signing the document means Limerick City and County Council agrees to support the ethos of the All-Ireland Pollinator Plan which means to consider the plan in their policies, plans, and management decisions where possible; to carry out one pollinator-friendly action in the first year of signing up, and plan to carry out at least three more within the following five years.

Michael Sheehan, Limerick City and County Council Parks Supervisor said: “There’s huge interest from the public in pollinators and an awareness that we have to take action now. The strength of the Pollinator Plan is its evidence-based guidelines which give clear advice on how each sector can improve their land for pollinators – for instance, by reducing grass mowing, allowing hedgerows to bloom, planting pollinator-friendly plants or reducing use of pesticides. The plan also improves the landscape for biodiversity generally across the island.”

Anne Goggin Senior Executive Engineer with Limerick City and County Council added: “It is important that we protect the bees as they are a crucial element of our ecosystem. We would love to hear what the public thinks and to get their suggestions for how to manage public areas in a more pollinator friendly way”.