Michael’s son Niall gives keynote speech on first night of festival. “Poetry is my life and my life is poetry," the words poet Michael Hartnett wrote in a letter to his son, Niall in 1998, the year before Michael died.

Niall read excerpts from that treasured letter on the opening night (Thursday 12 April 2018) of Éigse Michael Hartnett, the literary and arts festival which takes place each year in his father’s home town of Newcastle West, Co. Limerick.

In a keynote speech which will took its title from a line of Michael’s, The Possibility we have overlooked is the future, Niall Hartnett spoke movingly about his father and his work.

“He could weave a tapestry of a small town or an epic struggle at the highest level so seamlessly, you could not always tell which was which. Neither could he, I suspect, and did not see the point in separating the two: there is as much drama in Salad Sunday as there is in Sibelius! As much intrigue in Maiden Street as there was in Inchicore.”

“We need to honour this son of Newcastle West and the road less travelled he took to bridge many worlds early on. I feel we can best do this by encouraging ourselves and especially the young to choose unpredictable paths and unexpected destinies. Break the mould and proudly show others that you did. Invite the young, your family and friends to this festival and encourage them to nurture this legacy which will someday will be theirs. The future belongs to the young and they will carry all of this on we hope, but only if we engage them now! As the poet himself said: the Possibility we have Overlooked is the Future!” Niall added.

Officially opening the festival Mayor of the City and County of Limerick Cllr Stephen Keary said: “It is heart-warming to see that Michael is being celebrated in his home town. Michael was loved by everyone in Newcastle West, who knew him through his words, as the poet, and I’m delighted that his son Niall is here this evening giving us an account of Michael as a father. There are many sides to people, such as Michael and it’s invaluable that we get an insight into these, so that we can understand and appreciate the works of Michael Hartnett even more.” 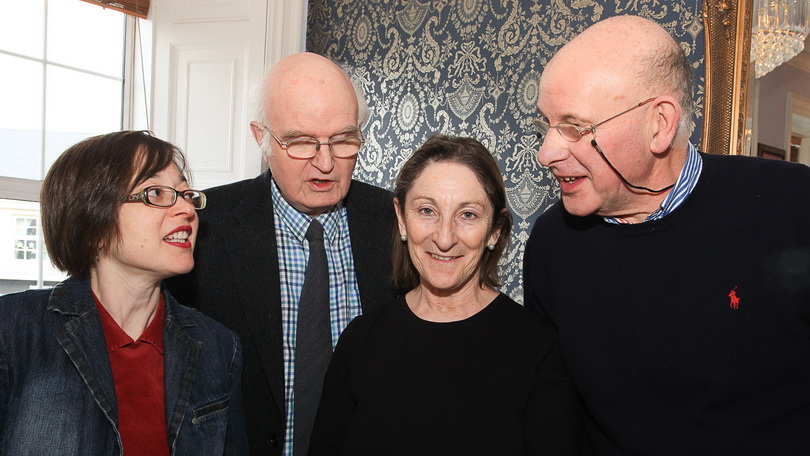 The opening night of Eigse also saw the joint winners of this year’s Michael Hartnett Poetry Award honoured: Macdara Woods for Music from the Big Tent (Dedalus Press 2016) and Mary O’Malley for Playing the Octopus (Carcanet 2016).

“Music from the Tent is a superb orchestra of verbal melodies, a Big Top in which free verse, ballads and haiku sing and cavort,” the judges Jo Slade and James Harpur said in their citation.

In accepting his award Macdara Woods said: “It is delightful to share with Mary O’Malley an award given in memory of my old and dear friend, Michael Hartnett. We had many wild times, and some quiet times, and adventures together, from Dublin to London to Kilkee, but what remains most clearly, and has become even more apparent with the passing of time, is his genius for poetry and the translation of poetry. I intend to take this award as a personal nudge from Michael.”

His fellow award winner Mary O’Malley added: “I am delighted to receive the Michael Hartnett Award, I too knew Michael and he had kind things to say about my young poems, he has remained a touchstone for me.”

Mary O’Malley’s Playing the Octopus was described by the judges as “a beautiful collection of rare gems that sparkle and seduce.” This is a collection that balances beauty and harmony, the poems are restrained but deeply felt, the voice assured, meaning is revealed slowly like an uncovering of essence, something essential and elemental.”

Éigse Michael Hartnett runs until this Saturday (14 April 2018) and highlights include readings by authors John Boyne and Mike McCormack, who has just been shortlisted for the 2018 International Dublin Literary Award.

Academic Professor Declan Kiberd will deliver the Michael Hartnett Memorial Lecture on Saturday, entitled, Honey I shrunk the kids, in which his lecture will raise the question of whether there is a children's literature, or whether the classic works from Alice in Wonderland to Harry Potter are written by adults, published by adults, often to promote adult agendas.

“It will then raise an even deeper question--whether childhood, as we know it through literature, is an invention of recent centuries, perhaps even an image constructed in the age of print and now fast disappearing with the spread of electronic and digital media. These are troubling questions,” Professor Kiberd said in advance.

Éigse takes place each year in Newcastle West, Co. Limerick, Hartnett’s home-town and is supported by the Arts Council and Limerick City and County Council.

The Michael Hartnett Poetry Award is awarded in alternate years to books of poetry in the Irish and English language.

For full details of the 2018 programme please check out www.eigsemichaelhartnett.ie