Skip to main content
x
2020-03-18 COVID-19 (Coronavirus): Those wishing to contact the Limerick City and County Council are asked to email customerservices@limerick.ie or contact the Council online using the MyLimerick service on Limerick.ie or by phoning 061-556000. Please click here for latest updates from Limerick City and County Council in relation to Covid-19 (Coronavirus).

Largest inner-city commercial development outside of the capital.

Limerick City and County Council has today (Friday 22 March 2019) confirmed that it has lodged a planning application to An Bord Pleanála for the Opera site - the largest inner-city commercial development outside of the capital.

The iconic site will be developed by Limerick Twenty Thirty DAC - a special purpose vehicle created by Limerick City and County Council in 2016 to transform a number of disused iconic sites in the city and county into catalysts for economic development and job creation.

The entity has been active over the last two and half years developing the world class Gardens International, which opened this week, advancing the mammoth Opera site project to planning, master-planning the 250 unit first phase of the Mungret Park housing development as well as the 10 acre Cleeves Riverside campus.

The 1.62 hectare Opera Site is however the largest project in the programme and will be developed over a six year period at a total cost of around €180 m. It is fully funded thanks to commitments from the European Investment Bank and the Council of Europe Development Bank.

The site was acquired by the then Limerick City Council in 2011 after a previous plan to develop it collapsed during the crash.

A transformational project for Limerick, Opera will be capable of employing up to 3,000 people across a 450,000 sq ft development. The project will be developed to LEED Gold and Nearly Zero Energy Building (NZEB) standardsand is expected to take six years.

Said Mayor of the City and County of Limerick Cllr James Collins: “With regard to the wider regeneration of Limerick, this is the project that we’ve been waiting for more than any. After stalling before while in private ownership, it has finally arrived, I’m delighted to say, at this key stage.”

“We had the opening of Gardens International this week and that set a new standard in terms of office space for Limerick. Opera is six times the size and will be the single most transformational project this decade in any city in Ireland.”

Said Chief Executive of Limerick City and County Council Conn Murray: “Getting Opera to this key stage is a big moment for Limerick and the region, one we’ve waited a long time for. We now see what this fantastic project will comprise and how it will change our city and the region for the good. The team at Limerick Twenty Thirty has worked tirelessly and meticulously to pull this mammoth planning application together and justifiably so.”

“Opera will be the biggest economic catalyst for our city in decades and the knock-on benefit of this across all strands of our society will be enormous. We now look forward to completing the planning process and moving on to developing this game-changing development for our city and region.” 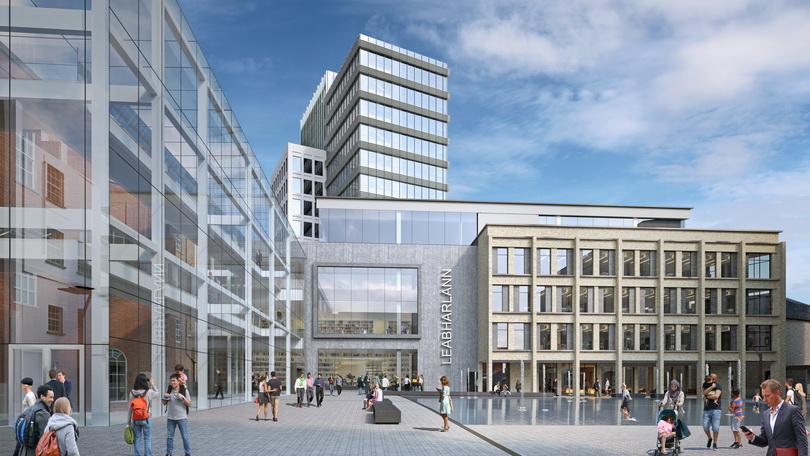 The application, in in accordance with Section 175 of the Planning and Development Act 2000, includes the demolition of all Twentieth Century buildings and later additions, the adaptive re-use of the Protected Structures and other structures of heritage value, and, the construction of c.45,170sq m mixed-use scheme comprising:

An Environmental Impact Assessment Report (EIAR) and a Natura Impact Statement (NIS) has been prepared in respect of the Proposed Development.

This application for permission, EIAR and NIS will be available for inspection free of charge, or may be purchased on payment of a specified fee (which fee shall not exceed the reasonable cost of making such a copy) during public opening hours excluding Bank Holidays, at the following locations:

Search ‘Opera Site Planning Application’ on www.Limerick.ie or click here to view or download the application plans and particulars and the EIAR.

Submissions or observations may be made only to An Bord Pleanála (“the Board”), 64 Marlborough Street, Dublin 1.