Limerick’s green credentials deepened today as it launched its European Green Leaf Year with the announcement of a programme of events to mark the European Commission designation. Some 26 events and initiatives are so far scheduled for a packed programme in Limerick, which was awarded the designation along with Belgian city Mechelen in recognition of its commitment to better environmental outcomes.

Among the events set to be held across the year in Limerick will be the first-time hosting in Ireland of Ireland’s Buzzing: International Conference on Pollinator Conservation. Being held in May at the Limerick Strand Hotel, Ennis Road, the conference will provide an opportunity to learn from international experts about successful pollinator initiatives around the world and hear about key successes from the first phase of the All-Ireland Pollinator Plan (2015-2020).

This week alone sees the programme kicked off with the launch of a Let’s Think About Consumption exhibition at the Council Headquarters, Merchants Quay that challenges us to think about what we consume and brings us beyond the idea of ‘reduce, reuse and recycle’ to be more conscious consumers with a ‘prevention first’ approach.

Also, this week sees the promotion of a ‘Hush City App’ that maps the tranquil spaces to enjoy in and around Limerick City - spaces with a positive impact on our health and quality of life. The app, which was developed by Dr. Antonella Radicchi in Berlin, can be used to identify and share places to enjoy and relax in the city. It will also facilitate the protection of these valuable areas.

Next month sees the Creating a Biodiversity Garden programme launched at the Council Headquarters, Merchant’s Quay. Located in a small green space beside the Council Offices, the garden will be developed into a biodiversity garden to provide an example of what can be done in a small urban garden to invite nature in. In March, the theme for the 2020 St Patrick’s Day Parade will also be Our Future is Green, focusing on environmental issues.

The full events programme, including an events guide, can be viewed here or at www.Limerick.ie/European-Green-Leaf-City. 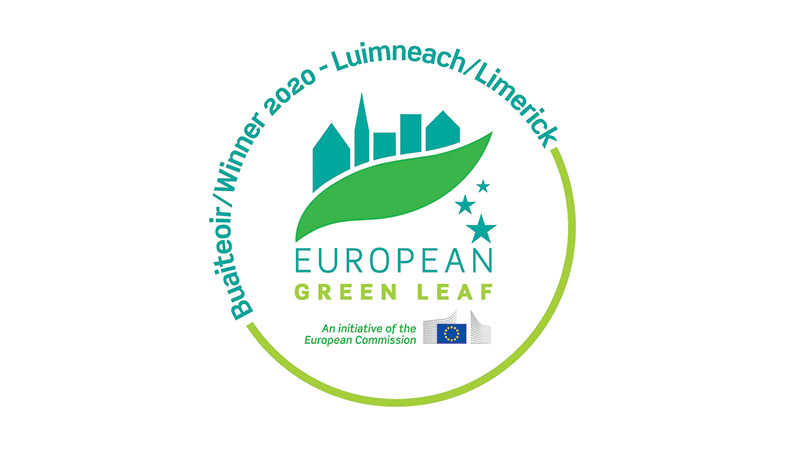 A total of 12 cities from across Europe entered the competition, with Limerick one of three cities shortlisted, winning the award with Mechelen in Belgium. The award, which goes to towns and cities with between 20,000 and 100,000 inhabitants, was given as much for Limerick’s vision and commitment to a more sustainable future as it was for anything already achieved, along with the city’s ability to act as a green ambassador.

Limerick turned the heads of judges because of its ongoing commitment to monitor air quality and improve noise levels in the city and transform itself into Ireland’s first digital city by integrating several public services, creating smart neighbourhoods and energy districts.

Launching European Green Leaf Year, Mayor of the City and County of Limerick Michael Sheahan said that Limerick ticked all the boxes for the judges. “We made a very strong case for the European Green Leaf Year. We had a fantastic story to tell about a range of areas like our Climate Change and Energy Performance; sustainable urban mobility; nature, biodiversity and sustainable land use programmes; noise/air improvement initiatives; what we have done on waste and the circular economy and on water. Limerick is synonymous with green in terms of our county colours but now we want to be synonymous with green in terms of what we are doing to tackle climate change. This is a priority for me as Mayor and for the city. We are national leaders this year and we want to continue to be.”

Said Minister Patrick O’Donovan: “At a national level we have an ambitious Climate Action Plan which is basically about developing a sustainable pathway for Ireland to achieve its long-term vision for decarbonisation. Everyone needs to play their part in this; government, the public, industry and, indeed, local authorities. Limerick City and County Council, I am happy to say, is delivering in that regard, as this designation shows. I am looking forward to a really exciting programme of events that by year end will have more and more of our green army here in Limerick on what’s going to be a winning team.”