Ireland Women's Rugby Team coach Tom Tierney might not need to look further than home for new talent in the future as his daughter Isabel Tierney, 7 shows her support for the team. Picture: Alan Place

Ireland Women’s Rugby captain Niamh Briggs was mobbed by young fans in Limerick earlier today (Thursday) as she arrived in the city by boat for the Women’s Rugby World Cup trophy tour.

The Limerick based garda and Munster fullback was escorted on the River Shannon by Limerick Marine Search and Rescue along with Nevsail kayakers as she made her way to Arthur’s Quay jetty to be officially met by Mayor of Limerick, Cllr Stephen Keary.

Fans were entertained by Spin South West and enjoyed free inflatable rugby kicking games in the park while on the water, Nevsail provided a very novel penalty kicking competition where enthusiasts tried their luck at kicking rugby balls at targets floating on the Shannon to win some great prizes. 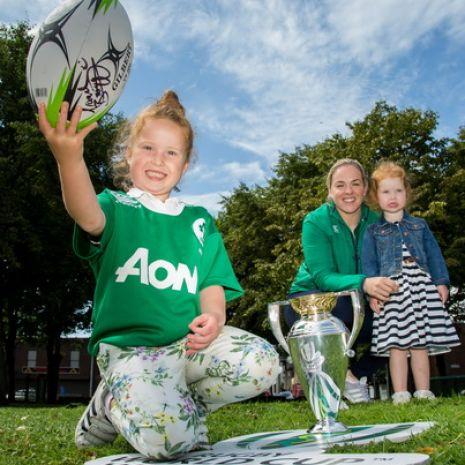 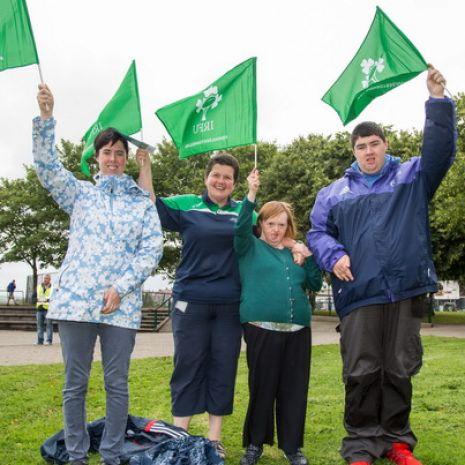 Speaking at the Limerick event, Niamh Briggs said: “It’s great to be here and see all the young kids out, the support we’ve been getting from the public is brilliant. We’ve taken huge positives from the fact that the warm up games have sold out early and the trophy tour is a huge pick me up, especially when the days are hard and the training is long and tough. You’re not just doing it for yourself and for the girls, it affects a lot of other people aswell. So we’re delighted to be here in Limerick today and really appreciate those who came out to say hello.”

Welcoming Niamh, Mayor Keary said: “Niamh is a fantastic Ambassador for the game and you only need to look at the faces of the many young girls here today who really look up to her and find her achievements truly inspirational. We wish her and the other four Limerick based girls in the squad, Eimear Considine, Anna Caplice, Ciara Griffin and the uncapped Nicole Cronin the very best of luck and hopefully they’ll be back here to Limerick in a few weeks after the World Cup with the trophy again!”

Head Coach Tom Tierney added; “Being a Limerick man born and bred it’s very special to see the crowds come out today and the trophy tour culminating in the home of Irish rugby. We’ve a great Limerick contingent in the squad, Nicole Cronin, our only uncapped player is a girl that will take the World Cup by storm. Limerick is the home of Irish rugby for both men and women and all the girls will be looking forward to putting in a big performance in the World Cup.”

Tickets for the semi-finals and finals stages of the Women’s Rugby World Cup, to take place in Belfast on the 22nd and 26th August, are available from ticketmaster.co.uk. Pool stage tickets are now completely sold-out.