There were jubilant celebrations in The Strand Hotel, Limerick as Adare claimed the top prize in Limerick Going for Gold 2017. Picture: Alan Place

There were jubilant celebrations in The Strand Hotel, Limerick yesterday evening (Tuesday 10 October 2017) as Adare claimed the top prize in Limerick Going for Gold 2017.

Limerick Going for Gold, which is sponsored by the JP McManus Charitable Foundation, has a total prize pool of over €75,000.  It is organised by Limerick City and County Council and supported by Limerick’s Live 95FM, The Limerick Leader and The Limerick Chronicle, The Limerick Post, Parkway Shopping Centre, I Love Limerick and Southern Marketing Media & Design.

A total of twelve communities made the final of the Limerick Going for Gold Challenge Category, before the winners were announced at the grand finale, attended by hundreds of people from communities across Limerick city and county.

Prizes were also awarded in six other Going for Gold categories.

Mayor of the City and County of Limerick Cllr Stephen Keary congratulated the participating communities for helping to ensure that Limerick Going for Gold 2017 continued to be a tremendous success.

“Limerick Going for Gold’s mission is to make Limerick a brighter, better, cleaner place to live, work and visit and every community who participated in this year’s event must be congratulated on the amazing job you have done once again.”

“It never ceases to amaze me how a shared sense of community spirit among people can help to transform an area.  It is clear that Going for Gold has also helped to complement, consolidate and add value to the council's involvement and engagement with the broader community sector in Limerick.” 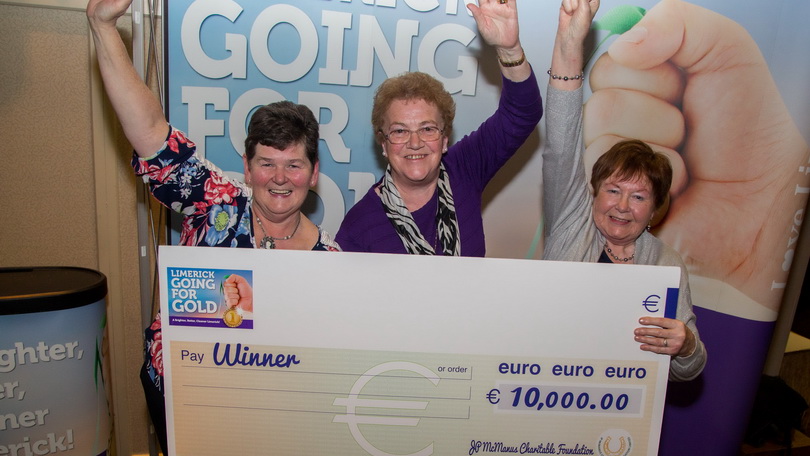 The Challenge Category final was made up of 12 groups from across Limerick.

Finalists were chosen by popular vote on Limerick’s Live 95FM over a five-week period.

The remaining groups were commended and received €1,000 each.

The following groups were highly commended and each received an award of €1000 – Ardpatrick, Athea, Broadford, Bruff, Caherconlish, Galbally, Kilmallock, and Newcastle West.

Prizes were also awarded to Tidy Towns groups based on their Tidy Towns score.

The Overall most improved across Limerick was Kilcornan (€2,000).

The Overall most improved in each Municipal District will be awarded €1,000 each and they were Abbeyfeale, Glenroe, Gouldavoher and Rathkeale.

There were four additional Tidy Towns incentive awards of €500 were presented to groups with the highest scores across the following categories:

The Grange in Raheen received the award for Best Newcomer (€500).

Endeavour Awards of between €500 and €1,000 were presented Limerick Fairtrade Committee, Limerick Youth Service Centre, Southill Tidy Towns Group and Westfields Wetlands to encourage and/ or support ongoing work on the environment.

In recognition of National Reuse Month the Limerick Going for Gold Reuse Award went to the UL Environmental Committee for their repair and repurpose initiative of on campus laptops, macs and smartphones, and to Our Lady of Lourdes for their Food Waste Prevention Project.

The Garden Competition Category was sponsored by the Parkway Shopping Centre and featured a prize fund of €1,000 in shopping vouchers.

In a new departure for 2017 the Limerick Going for Gold judges awarded a Judges’ Award trophy to The Bake House, Bruff, Tait House, Southill, Leen’s Hotel, Abbeyfeale, The Bridges in Croom and the Stryker Roundabout, Raheen.

The #Loveyourlimerick Photographic Competition was won by John McCarthy, for his depiction of a day in the life of Kilteely and Fiona Quinn for capturing a moment many of us will have seen along the quays in Limerick city.

Speaking at the event Noel Earlie from the JP McManus Charitable Foundation said: “It was considered important that recognition be given to community groups, in whatever form they take, for their contribution to the environment.  They’re role models for all of us, leading by example.  Congratulations to all the communities involved.  Your efforts are paying off.”