Limerick was awarded the title in conjunction with Mechelen in Belgium.

The city is effectively managing its air quality thanks to the acquisition of particle and gas monitors. Limerick also encourages people to leave their cars at home by providing better cycling, walking and public transport infrastructure with the aim of reducing transport emissions.

Limerick was also recognised for its development of noise maps and action plans, updated every five years, continuously monitoring the acoustic environment, analysing trends, and assessing the effectiveness of the actions undertaken.

The European Green Leaf Award (EGLA) is open to towns and cities with between 20,000 and up to 100,000 inhabitants, to recognise and promote their efforts towards better environmental management and outcomes. 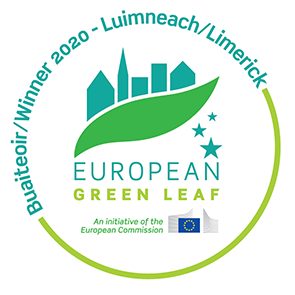 Limerick had been shortlisted in the Green Leaf Award category following a technical assessment of our bid earlier this year. Limerick competed against Lappeenanta, Finland and Mechelen, Belgium, for the title, while a joint prize could also be awarded by the jury.

Limerick, along with the two other shortlisted finalists, presented their vision of sustainable development and the work they are already doing and plans for the future at a special event in Oslo.

Each city had a 20 minute presentation to convince an international jury of their overall commitment to sustainable urban development, their city’s capacity to act as a role model to other cities, and their strategy for communicating and engaging with their citizens.

The jury assessed the shortlisted cities on the following criteria.

Speaking following the announcement of the winners, Mayor of the City and County of Limerick Cllr Michael Sheahan said: “We are so proud to be considered worthy of the European Green Leaf. We have already taken small steps in the area but after receiving this award, we are going to make giant steps to protect the future of our children. I want to live in a green, pollution-free atmosphere in Limerick.”

“It’s massive for Limerick. We have done great work. Out of that alone, we were considered worthy of the award. Now we have to put in place commitments we have given.”

Limerick City and County Council has been given a fund of €75,000 to deliver on its objectives for 2020.