Limerick City and County Council has welcomed the decision by An Bord Pleanála to approve the Foynes to Limerick Road development which includes the Adare Bypass project. The proposed project is 35km in length, at a cost of around €450m, and will connect the core Port of Foynes to the national motorway network.

The road development is comprised of the construction of:

The new Foynes to Limerick Road will promote efficient and effective transport links in the region, improve connectivity between Foynes Port, Limerick and the surrounding areas.

The project will also deliver a bypass of Adare, therefore improving the urban environment of the heritage and tourist town, while increasing road capacity, reducing journey times and improving safety for road users.

Mayor of the City and County of Limerick Cllr Francis Foley said: “Today is a very important day in the development of Limerick and in particular West Limerick. The new road will help connect the Port of Foynes directly to the national motorway network, making it easier for goods to be delivered. It will also allow for a bypass of Adare, addressing the bottlenecks in the area, meaning that the village can be developed even more as a tourist destination and host of the Ryder Cup 2027.

"It is incumbent that everything possible is done to ensure the Adare Bypass is in place by 2027.”

Chief Executive of Limerick City and County Council Dr Pat Daly said: “The proposed road will be very significant for the strategic development and expansion of Shannon Foynes Port, for West Limerick and the Mid-West Region in general.

"The Council will continue to work in partnership with the Department of Transport and Transport Infrastructure Ireland to expedite the delivery of this significant infrastructural project.”

Director of Transportation and Mobility with Limerick City and County Council Brian Kennedy added: “This project will include a bypass of Adare, which will run to the north of the village, and it will remove in the region of 70 – 80% of the traffic currently passing through the village – around 17,000 vehicles per day. The proposed road is vital to improve safety and remove traffic delays.

"Limerick City and County Council is very conscious that approximately 200 landholdings (including nine dwelling houses and approximately 105 farms) are impacted by the proposed development. We will continue to engage with all impacted landholders and householders over the next few weeks and throughout the duration of the project.”

Full details and documentation will be available shortly on the project website: foyneslimerick.ie and in Limerick City and County Council offices and libraries throughout County Limerick. 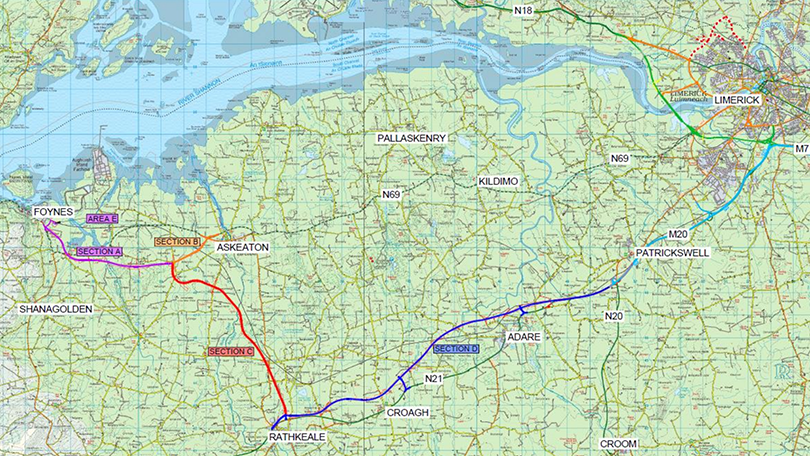