A bronze sculpture has been unveiled in Limerick to commemorate the iconic broadcaster, proud son of Limerick and Freeman of the city, the late Terry Wogan.

Large crowds gathered throughout the afternoon at Harvey’s Quay on the banks of the majestic River Shannon in Limerick city centre for the unveiling of the sculpture.

In one of his last official functions as Mayor of the City and County of Limerick, Cllr Kieran O’Hanlon welcomed past colleagues of Terry’s from the BBC and the Children in Need charity and members of the TOGs (Terry’s Old Geezers and Gals) fan club who had travelled from Britain to be at the official unveiling ceremony.

The sculpture made from bronze by award winning artist Rory Breslin sees Terry seated on a chair with microphone in hand preparing to have another one of his infamous chats.

Those in attendance got a chance to listen to Terry’s velvety tones on a large gramophone and watch some of his TV appearances on a large screen in a special event organised by Goldiefish Events on behalf of Limerick City and County Council.

Fans were also able to share their memories of the broadcasting legend by visiting a special ‘pop-up museum’ run by the curator of Limerick Museum, Dr Matthew Potter.

Some of Terry’s favourite music was played by Emma Langford, Downtown Dixie Band, ad the Boherbuoy Brass and Reed Band, who entertained the crowds.

Here in his hometown, Terry was always spoken of with a certain pride.  He was a Limerick person who succeeded on the international stage, but never forgot his roots.

Terry received the highest honour possible when he was made a Freeman of Limerick in 2007 and was given a special lifetime achievement award by Limerick Person of the Year.  He was conferred with an honorary doctorate of letters by the University of Limerick in 2004.

Mayor of the City and County of Limerick Cllr Kieran O’Hanlon said: “Today, we honour a man who, certainly across the water, was our greatest export.  Terry meant many different things to many people; but to all those he meant an awful lot.”

“There was a huge outpouring of grief when Terry passed away last year and it is only fitting that we remember him in his home city.”

“Terry has a special place in our hearts, and I hope those memories can be re-lived by fans with the unveiling of this sculpture, right in the heart of the city of his birth.” 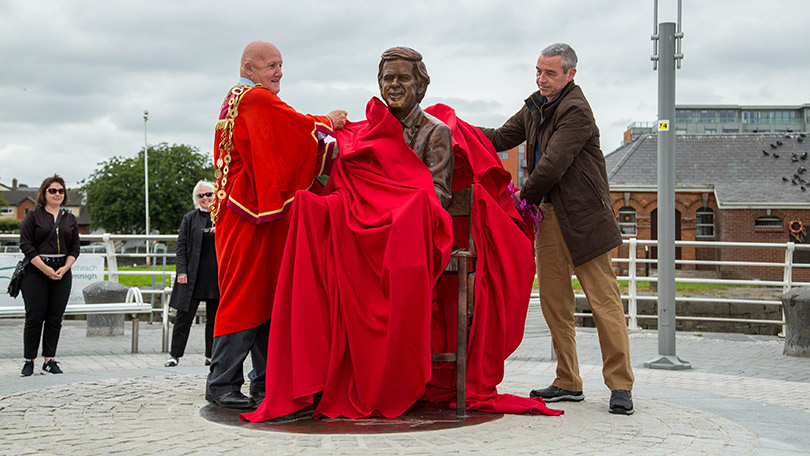 Josephine Cotter Coughlan, Director of Culture and the Arts in Limerick City and County Council added: “Terry was always spoken about with pride.  He was a Limerick person who succeeded on the international stage but never forgot his roots.”

“We are delighted to commemorate and celebrate a proud son of Limerick.  We are paying tribute to him as a person but also a broadcaster who had a special connection with his audience.”

Among his previous works are the bronze/ stone Sun Goddess in Westport, Co. Mayo; the Michael Hartnett monument in Newcastle West, a bust of former Chancellor of the University of Limerick Peter Malone and a bronze bust of WB Yeats which is in the National Library of India.

Rory Breslin said: “People have stories to tell about Terry, many of them about his skills as a broadcaster, but also stories of a decent man, who guided and helped many. It is an honour for me to make a piece like this, of such an iconic figure.”

“As Limerick is his home place I want to celebrate the man's skills but also to see the relaxed Terry, engaging and familiar to us all.  He was a genial man, quick to smile, cheerful and warm. I hope this piece conveys that.  That is the challenge in making a sculpture like this - to capture the nature of the person and to make sure it works in the context it will be located.”