Murroe developed as an ‘estate village’ associated with the needs of the nearby 19th century Glenstal Abbey. The settlement developed in a linear pattern from the cross roads, now signified by an imposing monument, towards the gates of the Glenstal Estate. 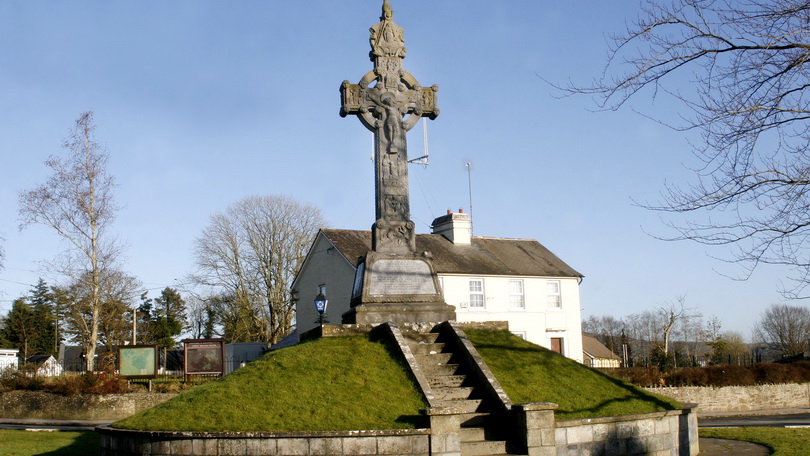 Glenstal Abbey was built as a residence for the Barrington family who, in later years, were to lend their name to a hospital in Limerick City. The Windsor Castle-style residence was constructed in the 1830s, complete with a Norman Gate to resemble a 12th century fortified structure.

Since the 1920s, Glenstal has been occupied as a monastery by the Benedictine Order, dedicated to Saints Joseph and Columba. The residence was raised to the status of an Abbey in 1957, and the Benedictines now run a boarding school for boys,a farm and a guest house. It is also a prominent centre for ecumenical gatherings and liturgical conferences. The Abbey is surrounded by a 500acre estate with streams, lakes and woodlands.

The Historic Graves project is a community focused grassroots heritage project. Community volunteers in Murroe helped build an online record of the historic graves in their own areas which unites to form a national resource.

Local Graveyards involved in the project:

Opened in July 1941, the first Muintir na Tíre hall in Ireland was built in Murroe on the grounds of the former village church. Murroe is the birthplace of Canon John Hayes (1887-1957), founder of Muintir na Tíre, a movement dedicated to rural improvement, driven by the people themselves for the welfare of the community.

Built to commemorate local men who died in the War of Independence. It was unveiled in May 1923, a month after the ceasefire of the Civil War. It was carved by William Gaffney, the stonemason responsible for the Irish cross at Lourdes, and was designed on the scale and pattern of the old Irish High Crosses. In May 2016, President Michael D Higgins planted a tree at the monument to commemorate the 1916 Rising. 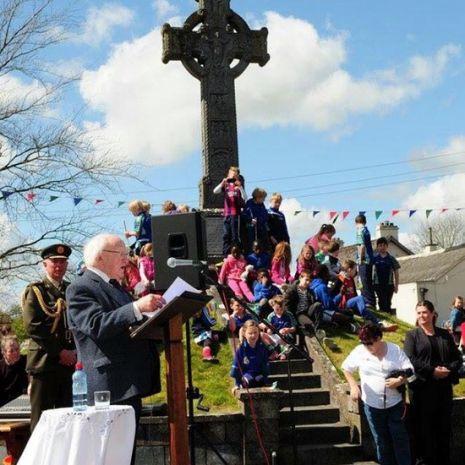 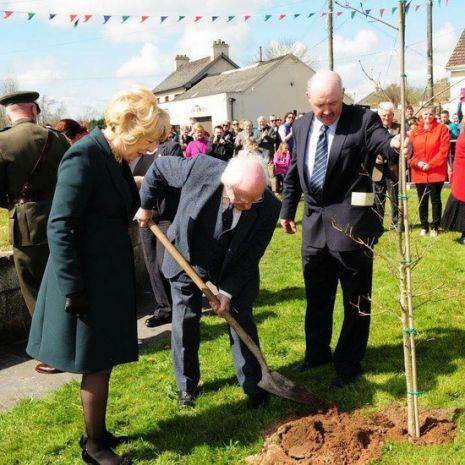 This is located at Cappercullen glen, on the grounds of Glenstal Abbey. Mass Rocks are a stone built altar used when Mass was being celebrated during Penal times (1690s to 1750s AD).

Discovered in an ancient burial chamber in Annagh, Murroe, in 1992. Now housed in the main exhibition hall of the National Museum in Kildare Street, Dublin. Was featured in Fintan O'Toole's book 'A History of Ireland in 100 Objects'. For more click here.

An exception to the general building pattern of the time is the village forge, constructed from random cut stone and with a distinctive ‘horse-shoe’ shaped main door. Given the importance of this facility to both the rural community and the Glenstal Estate, it is likely that the forge once provided a main focus to village life.

One of Murroe's famous children! Sheridan Le Fanu was the son of the Protestant rector in Abington, Murroe. He went on to become one of the leading writers of gothic horror stories in the 19th century. He wrote a book of short stories, several of which were set in Murroe. Le Fanu's ghost story Camilla is one of the earliest examples of a vampire story in English literature and was an important influence on Bram Stoker's writing two decades later.

Cistercian Abbey built in the 13th century. Became one of the most important Cistercian foundations in the country. Had fallen into disrepair by 1425. It was surrendered to King Henry VII in 1540 and English soldiers were garrisoned there. In 1548 it was burned down by O'Carroll of Eile. In the 1680s stone from its buildings was used to build Abington House. Some traces can still be seen beside Abington graveyard on the banks of the Mulcair river.

There is a ringfort on top of Lisavoora Hill on the left hand side of the road between Murroe and the Clare Glens. It was also the site of a 'monster meeting' for Repeal of the Act of Union by Daniel O'Connell in June 1843. It is believed over 200,000 people attended.

This is a hunting lodge owned by the Barringtons. Now in ruins, it is located in Glenstal Woods.