Situated in West Limerick, Abbeyfeale is the westernmost town in the county and is around 900 years old. The heritage trail is waymarked by a series of plaques that have been erected throughout the town in The Square, Main Street, Church Street and at the site of the old railway station on the Limerick Greenway. 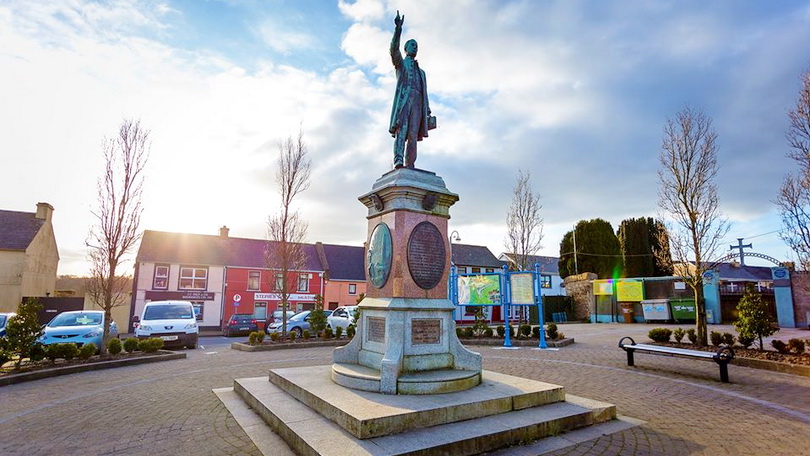 Mainistir na Féile, meaning 'Abbey of the Feale' is named after the former Cistercian Abbey which was located adjacent to the current town square, and is a historical market town. The Abbey, founded in 1188 by Donal O’Brien, King of Limerick, King of Thomond and King of Munster, has since all but disappeared, and the only identifiable remnants are those used in the construction of the Roman Catholic Church in 1847.

The main feature in Abbeyfeale’s Square is a statue of Father William Casey. Originally from Kilbehany in East Limerick, Fr. Casey was Abbeyfeale’s parish priest from 1883 to 1907 and was an advocate of tenant’s farmers rights.

The building formerly known as Leahy’s Inn is where Daniel O’Connell, 'The Liberator' and other members of his family, were registered numerous times in old business records between 1836 and 1842.

Daniel O'Connell was a well known barrister and later an even more powerful politician. He is best known for his campaign for 'Catholic Emancipation' - the right of Irish Catholics to sit in Parliament, his opposition to 'Tithes' - the payments by everyone in Ireland to the English Church, and his campaign for the 'Repeal of the Union' - Ireland to govern itself.

The same building, formerly known as Leahy’s Inn, is where Princess Cristina di Belgiojoso, Italian revolutionary and writer, is registered in old business records on 2nd Oct 1839 as hiring 4 horses and two drivers for her onward journey by carriage following her visit to Abbeyfeale. These are the only known surviving records of her stay in Ireland.

The building known locally as Eggleston’s on the corner of Main Street and Church Street was the site of one of the largest stage coach depots in the region in the mid 1800’s. It was operated by Italian-Irish entrepreneur and developer of public transportation in Ireland Charles Bianconi. It was one of a number of sites in Abbeyfeale registered to Mr. Bianconi in Griffiths Valuation of Limerick which was completed in 1853.

The Building traditionally known as W.D. O’Connor’s on Main Street which is deemed to be the finest example of work done by Stucco and Architectural Artist Pat McAuliffe. It is considered the most elaborate celtic design of his lifetime and includes both Latin and Anglo-Saxon phrases.

The site on Church Street of the original St. Mary’s Church, known locally as 'The Famine Church', was built largely from donations by parishioners prior to the Great Famine. Some of the stones used came from an earlier Chapel located at the old Abbey site in the Square.

The same site commemorates the life of Rev. William Casey, who first arrived in Abbeyfeale in 1869. While on horseback he rescued four young men from drowning during floods in the River Feale. He was an active member of the United Irish League in the fight for Tenants rights. He founded the Abbeyfeale Temperance Society, the Abbeyfeale Brass Band, the Abbeyfeale branch of The Land League, Fever Hospitals during the 1883 fever epidemic, the Abbeyfeale Football Team, prior to the foundation of the GAA in1884, along with being very active in Limerick County Council and many other organisations and committees.

A heritage plaque identifies the site of Purt Castle on the Limerick Greenway, a short walk from Abbeyfeale’s Old Railway Station. Originally known as 'Caisleán Phort Trí Namhad' (Port Castle of The Three Enemies), and later as 'Portrinard Castle', today it is known simply as Purt Castle. It is estimated to have been built in the early-mid 1400’s by the powerful Earls of Desmond. Originally built as a round wooden fortress and later rebuilt as a stronger square stone fortress of which some of its ruins remain today.