Adare (Áth Dara meaning 'ford of the oak'), located south-west of Limerick City, is designated as a heritage town. The River Maigue is tidal as far as Adare, with the settlement forming around the eastern bank of the Maigue overlooking the fording point from which the village gets its name.

Adare is a tourist destination and the local heritage centre, which gives insight into the history of the village, also hosts a number of craft shops.

To take a stroll through Adare’s streets is to be brought back in time and through history to a place where the mix of centuries is part of everyday life.

The main street is punctuated with beautiful stone buildings, medieval monasteries and ruins and a picturesque village park. The thatched cottages have survived for hundreds of years, and some of those cottages are home to arts and crafts shops and restaurants, while others are still privately owned.

Adare Heritage Trail is a roundup of the historical attractions and features of interest which can be found on a self-guided tour of Adare.

Please note that access to Desmond Castle is by guided tour only from the Adare Heritage Centre. Also limited access is available to the Franciscan Friary ruin by way of the Adare Manor Golf club (old course). Visitors are advised to check in with the clubhouse before proceeding onto the course to ensure safe access. 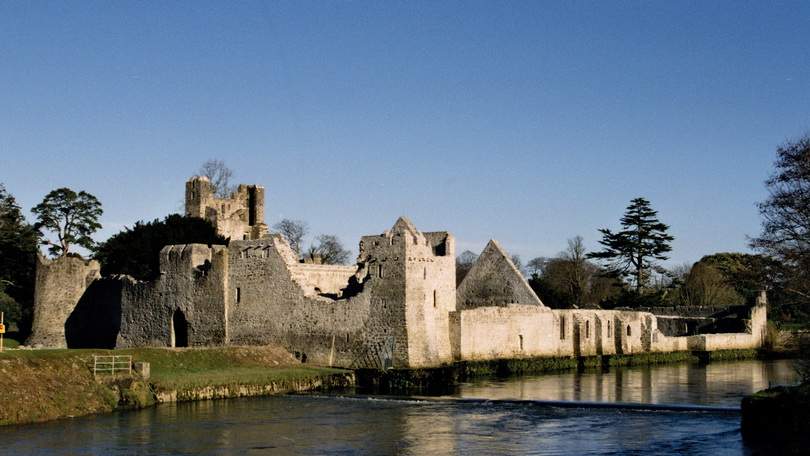 The ruins of Desmond Castle lie on the bank of the River Maigue. It was built around 1200 by a Norman knight called Geoffrey De Marisco. Geoffrey had an argument with the Bishop of Limerick, Hubert De Burgh and had to leave Adare. By 1228 the castle was owned by the Fitzgeralds, Earls of Kildare. These people were a powerful Norman family at the time. They lived in Adare from time to time but Kildare was their main base. 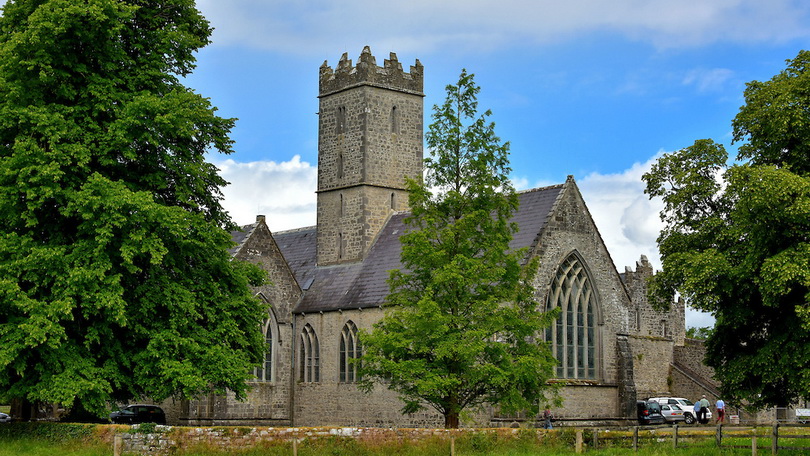 This monastery was founded in 1315 by John Earl of Kildare it became known as the ‘Black Abbey’ because the monks wore black habits. The Augustinians owned almost 80 acres of land, several cottages and gardens in the village and a fishing weir on the river. Learn more on adaretidytowns.ie here. 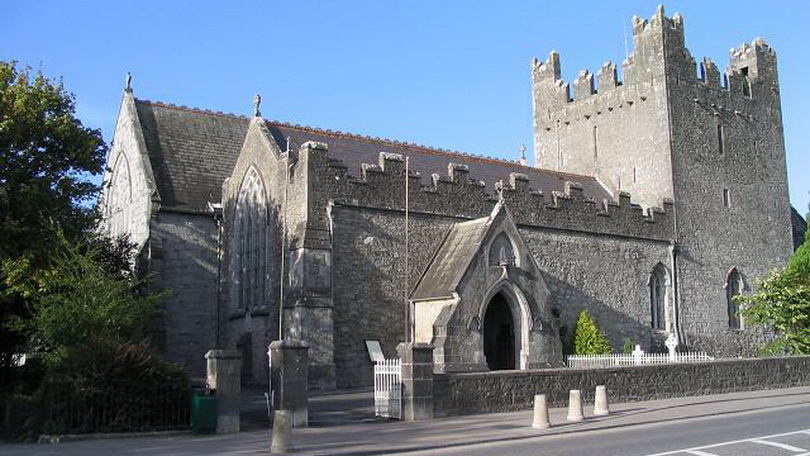 The Monastery was founded in 1230 at the request of the Earl of Kildare, a Fitzgerald. It is the only Trinitarian Monastery known in Ireland. The Order was founded in France at the end of the 12th century and their purpose was to raise funds to rescue hostages taken during the Crusades to the Holy Land. The monks wore a white habit and thus the monastery was called the ‘White Abbey’.  The monks lived and worked in Adare for 3 centuries. Learn more on adaretidytowns.ie here. 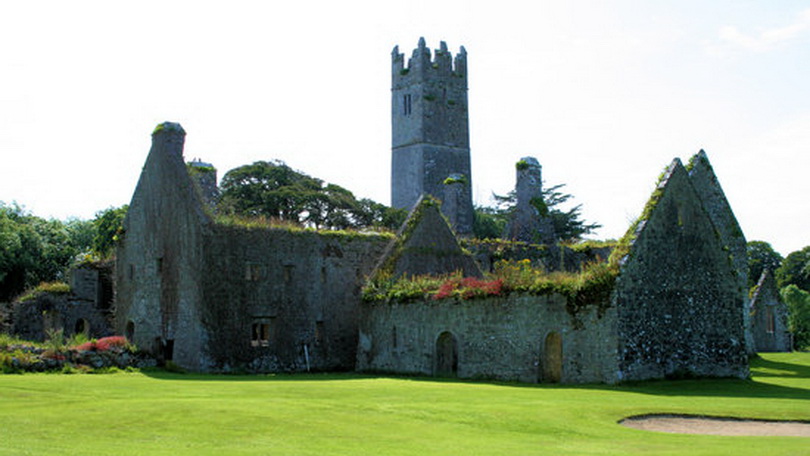 Thomas the 7th Earl of Kildare founded the Franciscan Abbey, also known as the Poor Abbey on 16 acres in 1464. It was dedicated to St. Michael the Archangel. The Abbey consisted of a church, cloisters, dormitories, library, three chambers, a kitchen, a bakery, an infirmary, three parks, a water mill and two fish weirs – one for salmon and one for eels. Learn more on adaretidytowns.ie here.

Adare Manor and the Dunraven Estate 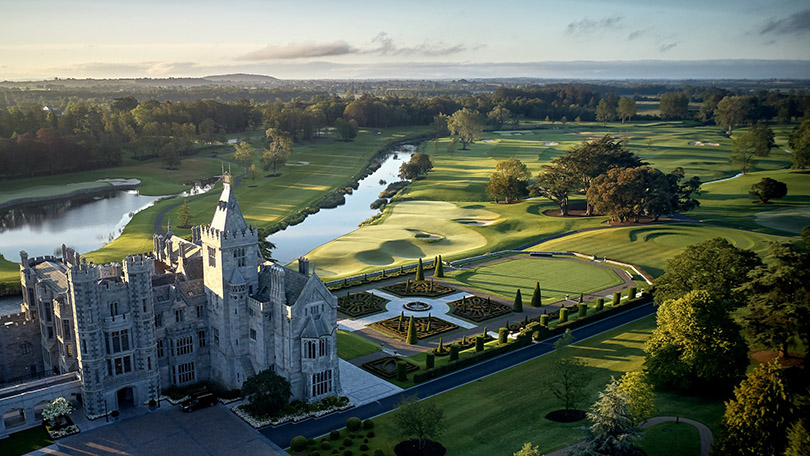 The history of the Manor can be traced as far back as 1226 when King Henry III gave a grant to Justiciary of Ireland Geoffroi de Morreis (de Marisco) to hold an eight-day annual fair following the Feast of St. James at his Manor of Adare. De Marisco left Adare following a row with the Bishop of Limerick.

The lands subsequently were granted to the Earls of Kildare, members of the Welsh-Norman FitzGerald family who came to Ireland in 1169. They looked after Adare and the Manor in the thirteenth, fourteenth and fifteenth centuries. When Silken Thomas rebelled in 1534 they lost the Adare Manor through the Act of Attainder which was passed against Thomas FitzGerald, 10th Earl of Kildare, whose lands, castles and manors were forfeited to the crown. Learn more on adaretidytowns.ie here.

Other Historical Attractions in Adare

A little stream flows through Adare. It can be found in the centre of the village and it flows under a two arched bridge called the Droichid’n.

Local records show that there were three dovecotes in Adare; one of which is part of the outbuildings of the Trinitarian Abbey. It is a circular building with a dome shaped roof and is about 17 feet high.

The fountain is one of Adare’s central landmarks. It is situated near the Catholic Church and at the entrance to the burial ground.

Built in 1792 as a hunting lodge by the earls of Dunraven, the hotel also has a long history in hospitality.

Originally built by the fifth Earl of Kildare circa 1390-1410, this bridge was widened in 1837 by the Earl of Dunraven who added the large refuges.

Pope’s Quay, just a short distance down from the railway bridge, was established in medieval times and served the community of Adare until the middle of the last century.

The former Adare Courthouse is an impressive stone building at the roundabout in the centre of the village. The courthouse was built in 1863, when its construction was financed by the 3rd Earl of Dunraven.

Adare Hall on the site of the old fairgreen was designed in an English Tudor style by the Architect, W. Clifford Smith was built in 1911 by the Earl of Dunraven.

In the late 1890’s the 4th Earl of Dunraven employed the Scottish professional Ben Sayers to design a 9 hole golf course on the Earl’s estate in Adare.

The Dunravens built the Lantern Lodge. In the late 1800’s and early 1900’s there was a kitchen, two little rooms and a spiral staircase inside. It was called the Lantern Lodge because of its shape.

The first Methodist chapel in Adare was built in 1794 and the site of the chapel is marked on the 5th fairway in the Adare Manor Golf Club course.

The austere stone façade of this building, indicative of its former use as a fever hospital, makes a notable feature on the streetscape.

Detmar Blow (1867-1939) was a prominent architect of the Arts and Crafts movement. These cottages are designed in a similar style to the earlier nineteenth-century estate cottages of Adare Manor.