Find out more about this mystical and enchanting place of stone circles, megalithic tombs, crannogs, ring forts and castles. The stunning views and walks around the lakeshore are impressive enough but you’ll also find ancient burial mounds, megalithic tombs, forts and standing stones scattered around this mysterious landscape. The magical fairy trail and superb Solstice Playground at Lough Gur are sure to enthral the younger folks!

COVID-19 Notice: Lough Gur Heritage Centre, Solstice Park Playground & Beechwood Kiosk remain open. Due to Level 3 Covid restrictions the small exhibition area is closed. Visitors must continue to practice social/ physical distancing and other guidance as outlined by the government and health experts. Opening hours: Weekdays - 10am to 6pm. Weekends: 10am to 6pm.

Lough Gur, Limerick’s Lake District, is at the heart of a remarkable archaeological landscape featuring sites that represent every major period of human history in Ireland. Physical evidence of occupation from the Neolithic, Bronze Age, Iron Age, Early Christian, Medieval, Early Modern and Modern eras has been found in the immediate vicinity.

It is home to Ireland's largest and oldest stone circle.  At one point in time it was also home to the largest concentration of Giant Irish Deer in Europe. Lough Gur has breath taking scenery along with a fairy trail and tree trail for younger and young at heart visitors. The new Beechwood Kiosk is also open since September 2020.

The Heritage Centre at Lough Gur displays the rich heritage of Lough Gur through interactive multimedia exhibitions that brings to life over 6,000 of archaeology and history. Fully trained and qualified guides are also on hand to answer all of your questions.

The exhibition is suitable for all ages and brings the visitor on a journey through the history of Lough Gur starting during the Mesolithic Era, and progressing until the 19th century. 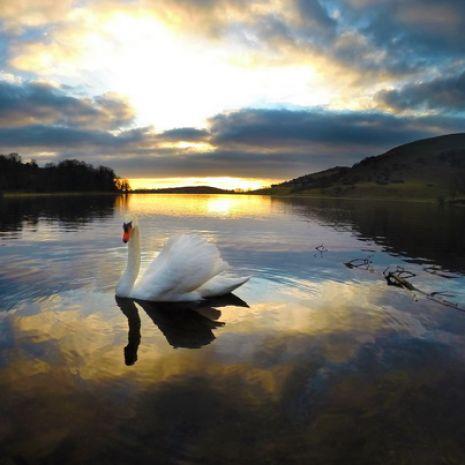 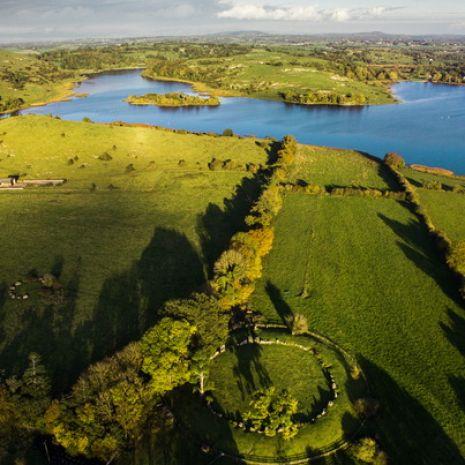 People come to Lough Gur for its beauty and tranquillity but many want to find out more about this magical place. In response to this demand, local historian Michael Quinlan established the Lough Gur Guides to allow others access to the wonderful history, folklore and archaeology of the place.

There is now a core team of 10 trained guides who will show you the most historical sites in the area and who will pass on their knowledge to you in a friendly and informative manner. Questions are always welcome to help further your understanding.

A wide variety of tours are available from general group tours held to more personalised tours depending on your own requirements. These are available all year round.

For further information or to book a tour please contact 061 385186 and prepare to be enchanted by the magic and history surrounding Lough Gur.

Lough Gur is a lake in County Limerick, Ireland between the towns of Herbertstown and Bruff. The lake forms a horseshoe shape at the base of Knockadoon Hill and some rugged elevated countryside. Lough Gur is a shallow lake measuring 3.5 meters at its deepest level. The lake is fed from underground springs and is not free flowing. The lake and the surrounding area is known to be one of  Ireland’s most important archaeological sites. Humans have lived in Lough Gur since Neolithic times. The site of Lough Gur is the only area in all of Ireland where you will see visible remains of every age of mankind throughout the centuries.

The Heritage Centre and Solstice Park playground are located on the lake front was officially opened in 1981 and was taken over by the local community in 2011. Since this time the Centre has received a full upgrade and refurbishment. The buildings are inspired by the Neolithic houses on Knockadoon. A gradual shore-line is present at the visitor area, with a shallow section of lake reaching up to the maintained lawn. As a result, the area is often used for water sports, though motorised craft and fishing are not permitted on the lake.

Next to the lake there is a castle, or tower house (closed to visitors) near the entrance to the carpark. Named Bourchier’s Castle after Sir George Bourchier, the son of the second Earl of Bath, it lies at the neck of the peninsula around which the lake washes. There is some other architecture dating from more recent times, with the ruins of an early Christian church by the road leading down to the lake.

At the far end of the lake are the ruins of a Norman castle, Black Castle, which is reached by a hill-side walk along the east side of the lake. This is one of the keeps used during the Desmond Rebellions, and is probably the place where the Earl of Desmond secured his authority in 1573 after casting off his English apparel and donning Irish garments on his return to Munster from London.

The stone circle at Grange, the largest in Ireland, comprises a ring of continuous uprights up to 2.8m high, with a diameter of 45m and backed by an earthen bank 9m wide and about 1.2m tall. The entrance on the eastern side is paved and flanked by uprights. Clay has been packed down to a depth of 60 cm across the whole area of the enclosure.

On excavation it was found to be littered with late Neolithic Beaker pottery. Its near perfect shape and the discovery of a posthole in the very centre of the enclosure, indicates that the circle was measured out from a central stake with a rope. Twelve large orthostats have been placed at intervals around the stone ring, each standing directly opposite one of the other ‘axial’ stones. The stones are contiguous rather than free-standing, and the surrounding bank makes it look more like a form of henge monument than a conventional stone circle. This embankment and the precise arrangement of orthostats suggest that this site had a ritual purpose.

It is the largest standing stone circle in Ireland, 150 feet in diameter and enclosed by 113 standing stones. The largest stone is Rannach Chruim Duibh (Crom Dubh’s Division) and is over 13 feet high and weighs 40 tons. The entrance stones are matched by a pair of equally impressive slabs on the southwest side, whose tops slope down towards each other to form a v-shape.

A short distance to the north-north east of the main stone circle, is a second smaller circle, also constructed of large stones. To the north of this is a large leaning standing stone.

Lough Gur is a magical and mysterious place that is rich in folklore along with a wealth of archaeology and history dating back to Stone Age times. The Heritage Centre provides a fascinating interpretation of the sites associated with Lough Gur. The facility was completely refurbished and upgraded in 2013.

Please note: Due to Level 3 Covid restrictions the small exhibition area is closed.