On 13th September, a three-hour live broadcast will take place at The Record Room on Catherine Street and will feature live performances and interviews from We Come in Pieces, Dott, and Post Punk Podge and the Technohippies.

The broadcast will go out live on 99.9FM in Limerick, will stream from Wired FM’s website, and Wired will also have a special high quality video stream on Facebook on the night too.

Tickets for the broadcast are free. To be in with a chance of winning one, you need to stay tuned to the Wired FM Facebook and Twitter. Each of the bands will be giving away tickets too, so there will be multiple ways of winning tickets in the run up to the event. Ticket giveaways will also take place across Limerick college campuses during student orientation and induction.

We Come in Pieces was formed back in 2010 and within a hectic 2-year period they released two full length albums while touring the UK and Europe four times. After a run of bad luck and life getting in the way, the band hit the skids. Returning 6 years after their last release (among subsequent other failures), WCIP released their epic third full length offering Stop the Rot. Available on heavyweight vinyl, CD and digital, it features eleven tracks of fast, heavy, hairy, aggressively balding rock and roll music. 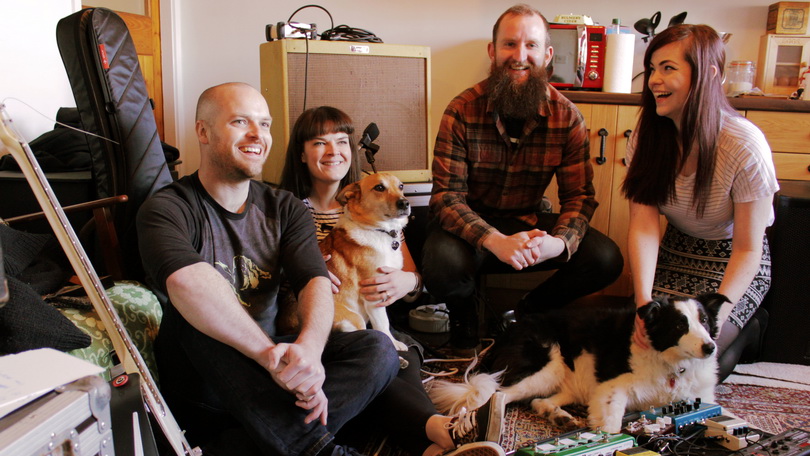 Coming off the back of a string of dates to launch their excellent new album, DOTT make a welcome return to Limerick after a prolonged absence. The eagerly awaited Heart Swell was released on Graveface Records back in June. The first single from the album, Like a Girl featured Sadie Dupuis from Speedy Ortiz on guitar. Dott have spent the summer busy with performances across Ireland and the UK. Some highlights have been the Galway International Arts Festival, Other Voices Ballina and the Irish and UK tour with We Are Scientists.

Post Punk Podge and The Technohippies have been having an incredible year, with appearances at Body & Soul, Knockanstockan and two performances at this year’s Electric Picnic. The epitome of the DIY ethic, they have been winning over fans with their energetic performances – an attack on the senses, part sermon, part punk and hip-hop, wholly raucous and infectious. The influences do not stop there; their sound is a hybrid of many other genres including Krautrock, Irish Trad, Techno and Classical. They released their debut EP entitled Kick Against the Pricks last year, and Podge released the Stark Raving EP with Naive Ted in October 2017 and collaborated with Jimmy Penguin on his Savages EP in May 2018. With they are consistent output, and commitment to playing live across the country, its cleat they are in the music game for the long haul and not a mere temporary success.

Broadcasting on 99.9FM in Limerick City, Wired transmits 57 hours of programming every Monday to Friday during the academic year. The station has been going for 23 years, and the schedule is made up of programmes produced entirely by student volunteers. The station has an open door policy for all students in Limerick. If you study in Limerick city, and want to get involved, email manager@wiredfm.ie today. The station returns with a new schedule in October, until then, an extensive archive of programmes can be listened to on the website.

The Record Room is a newly opened intimate basement venue down stairs from The Commercial on Catherine street in Limerick City. Since launching this year, The Record Room has been host to gigs from Mark Geary, Cloud Catle Lake and Paddy Mulcahy, recent music festival Féile na Gréine and local DJ’s Tom Prendergast and Peter Curtin.