On July 8th 1989, the late Hollywood star, Maureen O’Hara Blair officially opened the museum at a colourful ceremony attended by hundreds of overseas and local supporters and dignitaries. Now, almost thirty years to the day, the museum will celebrate its continued growth and development with a day of family fun, entertainment and fireworks on Sunday July 7th in Foynes.

“It’s hard to believe that 30 years have passed”, Museum Director Margaret O’Shaughnessy said, recalling the big efforts that went into establishing the museum. “It all started with a big idea,” she continued, “But there was huge support for that idea from the late entrepreneur Tony Ryan and his company, Guinness Peat Aviation, Shannon Development and from former flying boat crew members and staff as well as from the local community council  and in 1988 a small group of dedicated people set about making it a reality.”

Also from the beginning, the support of Maureen O’Hara for the project was crucial in helping open doors, Ms O’Shaughnessy added. “Her late husband, Captain Charlie Blair, had flown many times into Foynes and flew the first passenger nonstop flight Foynes-New York and holds many records on the North Atlantic. He also took the last commercial flight out of Foynes and came back to visit in his Sandringham Flying Boat in 1976".

The museum was intended to record and to celebrate Foynes’ unique place in Irish aviation history and its pivotal role as a transatlantic aviation hub from 1937 to 1945. It was also intended to remember those men and women who had flown and staffed the flying boats in what were difficult times and to illuminate the stories of those who passed through Foynes in those heady days.

“Many of those on the passenger lists were household names or became household names, people like Bob Hope, Gracie Fields or John F Kennedy and this generated huge excitement in the village,” Ms O’Shaughnessy said.

The original GPA Flying Boat Museum was a modest affair, housed in four rooms leased from the then Foynes Harbour Trustees to the rear of the building which once served as the flying boat passenger terminal. 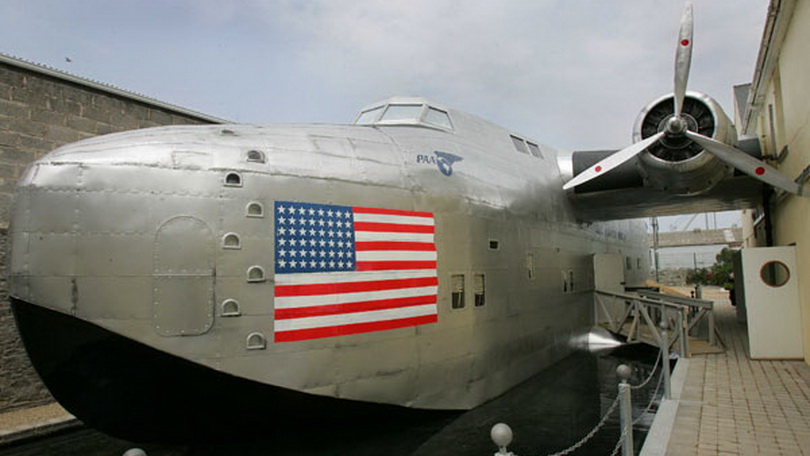 Full-size replica of a B314 flying boat on display at the museum.

In the three decades since, new memorabilia, new artefacts and new elements to the story have been added and the museum has expanded to house them as well as the full-size replica of a B314 flying boat. It now occupies the entire original terminal building along with new extensions and the control tower has been restored. The museum has also extended its reach to include the maritime history of the estuary, the story of Irish Coffee and the Maureen O’Hara collection. The museum complex now also houses a restaurant O’Regans, named after the late Dr Brendan O’Regan.

Now known as the Foynes Flying Boat and Maritime Museum, it has garnered many awards and continues to be the global repository for the memories and memorabilia of the flying boat era and is the only museum of its kind in the world.

The museum now employs 26 people and attracts 60,000 visitors each year and these figures continue to increase, making it one of the prime destinations for tourism in Limerick.

“So many people have contributed in so many ways over the years to help make the museum the success it has become, and the support of the local community has been vital,” Ms O’Shaughnessy said. “We are grateful to all those who have played a role, big or small and we hope they will all join with us in our 30th birthday celebrations on July 7th.”

The celebrations begin at 1.30pm with a recital by the Army Band No. 1 Brigade in Museum Square.

From 2pm to 5pm, family entertainment will continue in Museum Square with Disney characters, a circus show, face painting and much more.

At 3pm, in keeping with the spirit of the day, there will be a fly-past by members of the Irish Historic Flight Foundation (weather permitting) and at 3.30pm, local band  Escapade will entertain the crowds in Museum Square.

At 11pm, there will be a spectacular fireworks display over the Shannon.

Museum admission on the day from 10am to 4pm will be half price.

Over the weekend, Foynes will also enjoy a bit of true-blue American movie-going magic with Retro Drive-In Screenings of Grease, Top Gun, The Greatest Showman, and A Star is Born. Experience the giant screen from the comfort of your car. Tickets available at www.retrodrive.ie.