Up to €2 million has been invested in academic scholarships for students at the Technology University of the Shannon’s (TUS) Moylish, Clare Street, Thurles, Clonmel and Ennis campuses over the last eight years.

Today (Tuesday April 12, 2022) at a special ceremony at the Millennium Theatre, TUS, Moylish Campus, Limerick Senor Hurling Manager John Kiely presented 30 students with their scholarships for the 2021-2022 academic year, through the Leaders@TUS programme (previously Leaders@LIT) and the HEA’s 1916 Bursary.

Congratulating the scholarship recipients Professor of TUS Professor Vincent Cunnane said these programmes provide more than just support for the individual - the positive repercussions can also be felt in the community and the economy.

“One of the founding principles of TUS is access to education for all those who would benefit from it. For many people access to education depends on more than academic ability or a willingness to learn; it requires financial assistance and structural supports. These scholarships get to the heart of those requirements as they provide students with financial assistance, mentorships and work experience with a company who is invested in their future and that of their community. The long-term benefit to the supporting companies, the community and indeed the local economy is the availability of highly employable, work ready graduates, who have already proven their determination to succeed,” he said.

Addressing the ceremony 1916 Bursary recipient Donna Hogan told how determination saw her overcame adversity to return to education later in life. “With many barriers to cross, I made a commitment to myself to overcome addiction and my journey to return to education began with the Boxing Clever course, which is an addiction studies and health related fitness course. Following that I engaged in the SHEP Personal Development course and then Corpus Christi National School helped me to take the next step by empowering and supporting me to participate in the Access Course at TUS.” Donna is now a first year Community Development and Addiction Studies student at TUS.

For Aisling Rock from Roscommon the Leaders@TUS scholarship eased her financial pressures as she returned to third level education to study Art and Design at LSAD TUS. “I am now able to reduce my part-time hours allowing me more time to concentrate on college work. I find the real benefit of this scholarship is the mentoring programme which has built my confidence and taught me time management skills, that means I am not overwhelmed by the workload.” 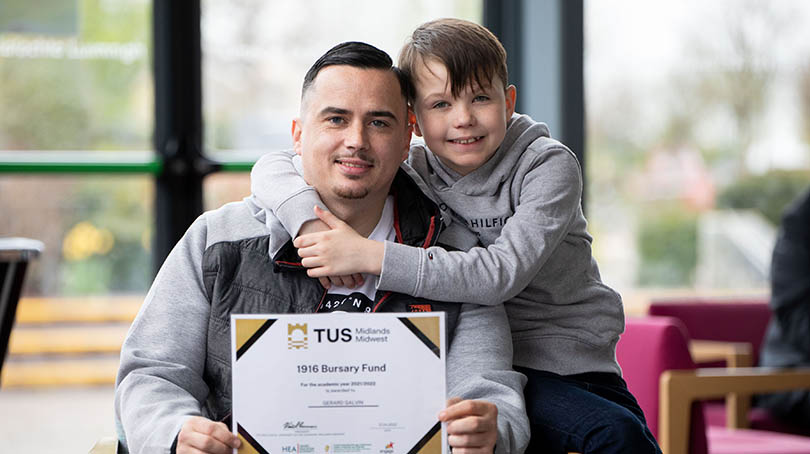 1916 Bursary recipient Gerard Galvin is a member of the Travelling Community, whose early education was disrupted by moving numerous times between England and Ireland. In his address he said he never felt like he belonged in an educational environment. “However, I wanted stability, to break the bad cycles in my life, and I wanted to be a good role model for my children. I had come to a stage in my life where I had to make a decision, I was at a crossroads. A friend of mine from one of the local areas told me about a transition to education course at TUS.” Today Gerard is a scholarship recipient and first year Social Care student in TUS.

Leaders@TUS recipient Paul O’Heaney said, “To be a scholarship recipient not only took the burden of payments away but thoroughly helped me progress with my studies and get the absolute best out of my day to day encounters in TUS. I will forever be thankful for the opportunities I have received during my studies in TUS and look forward to a bright future ahead.”

Vice President for Student Education and Experience TUS, Frances O’Connell told those attending the scholarship ceremony, “The mission and vision of TUS is underscored by its values, which includes equity and inclusiveness, where we value and promote inclusiveness, equity of opportunity and respect for all students and staff, especially those from under-represented groups, such as ethnic minorities and persons with disabilities. Today is the manifestation of TUS actualising our mission and values in this ceremony.”

CEO of the Higher Education Authority, Dr Alan Wall explained that “The 1916 Bursary Fund is a key pillar underpinning the National Access Plan and in supporting students from a diversity of backgrounds to access, participate and succeed in higher education. In the current academic year, the 1916 Bursary Fund has expanded with over 800 students nationwide receiving a bursary of some kind.”

Dr Liam Brown, Vice President Research, Development, Innovation TUS, thanked the companies in the Mid West for their continuous support of the scholarships. “These scholarships make a meaningful difference to the lives of students, allowing them to focus on their studies and giving them the greatest chance of success. We are particularly thankful to the donors whose financial contributions make this programme possible. I would also like to thank our staff and all involved including the schools that help to make this programme so successful.”

Presenting the scholarships John Kiely paid tribute to the recipients. He said, “I am honoured to be joining everyone at TUS for the Leaders@TUS Scholarships and 1916 Midwest Bursary Awards Ceremony to honour the recipients who have worked so hard. It is a special day for the recipients and their families and to be a part of it is a great privilege. They are the future and future is bright."