Limerick Museum's collection illustrates the history of Limerick and its people. The displays include archaeological artefacts, Limerick silver, Limerick lace, examples of local printing, military artefacts and much more. 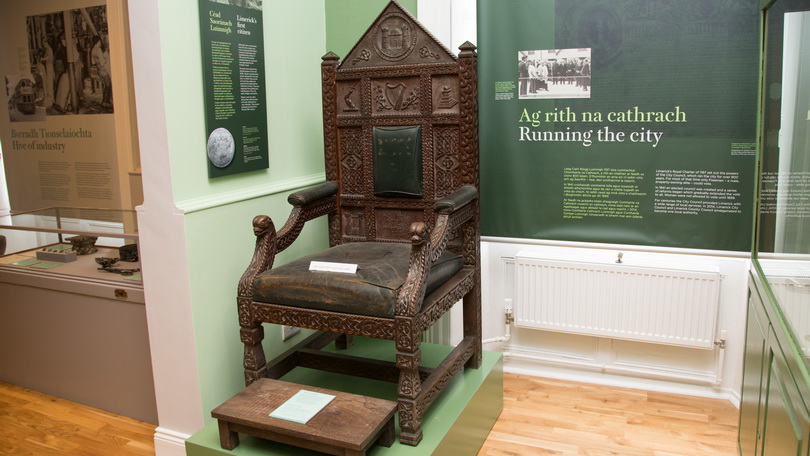 Getting to Limerick Museum

The Limerick Museum is a free-of-charge museum and is located in The Old Franciscan Friary, Henry Street, Limerick. It is less than a five minute walk from the Tourist Office and O'Connell Street and 15 minutes from the rail and bus station. The exact location of the museum can be seen on the map at the bottom of this page.

The nearest bus stops are on Henry Street (Stop No.606821) which services 302 Caherdavin, 303 Pineview, 306 Ballynanty, and also on Sarsfield Street (Stop No.607831) which services Raheen, Edward Street and University of Limerick. We are also close to the Arthur's Quay bus stop which caters the M7 Express lines from Tralee, Killarney, Ennis and Dublin, as well as the Eireagle bus line from Dublin, and JJ Kavanagh's Buses which travel from further afield.

If travelling by car, parking is available at Arthur's Quay through the shopping centre, and on Henry Street through Dunnes Stores.

What Limerick Museum Does

At Limerick Museum, we are dedicated to bringing the history of Limerick to life. We try and achieve this goal by telling the story of Limerick city and county through our exhibitions and projects with different community groups.

We maintain a strong online presence, with our twitter and facebook feeds posting about interesting historical objects on a daily basis.

The Museum's catalogue is an expansive online tool that can be used to search for and examine all of our artefacts that make up our collection. The catalogue is available online here.

Keep an eye on this site as well as our social media pages as we often hold events throughout the year.

Limerick Museum accepts new objects or donations from members of the public into the museum collection, and we do our best to have it accessible and viewed on our catalogue as quickly as possible. We have a specific policy on donations and collecting, which can be viewed here

The Museum was founded in 1907 and was opened to the public in 1916. Its original location was in the City Library, which was then in the Carnegie Building in Pery Square and the librarian of the day was its curator.

The Museum was closed to the public between 1974 and 1979, it reopened in new premises in St. John’s Square, where it remained for 20 years. In 1998 the Museum was on the move again this time to Castle Lane before taking up residence in Istabraq Hall in Merchant's Quay.

On the 30th May 2017 the Limerick Museum moved to its new home in the former Franciscan Friary on Henry Street in the heart of the city centre.

Limerick Museum is dedicated to the memory of Jim Kemmy, the former Democratic Socialist Party and Labour Party TD for Limerick East and two-time Mayor of Limerick.

The story of the city and county is presented through its objects, from Stone Age axes to medieval coins, from the civic sword of Queen Elizabeth I to medals presented to veterans of the 1916 Rising.

Among the more unusual items include: Ireton’s Cat, a mummified cat found on Nicholas Street in the 1890’s; a fragment of the largest meteorite that ever fall in Ireland in 1813 and two World War II gas-masks, that fortunately never had to be used.