The importance of Rathkeale as a centre can be traced back to the foundation of an Augustinian priory in the town in 1289. Its location on the river Deel added to its influence in the area.

The arrival of the Palatines also contributed to the development of Rathkeale. The Palatines were Lutheran refugees who fled from the Rhenish Palatinate of Germany due to an invasion by the French. They came to the area in 1708-09 under the patronage of Lord Southwell. Approximately twelve hundred Palatines came to settle in the area and brought with them new ideas in farming and were a large contributing factor to the development of the town. Rathkeale was also a major market town for the area and held seven fairs throughout the year.

The name Rathkeale comes from the Irish 'Ráth Caola', believed to be derived from Ráth gCaeli, which means "the fort of the Caeli" or "the Rath of Caola".

Rathkeale witnessed a surge in industrialisation throughout the eighteenth century. In 1717 a factory for hempen sailcloth and a linen market were established. By 1820 the town had as many as 31 occupational categories, three tan yards, a brewery, a distillery, a bleachyard, and was manufacturing soap candles, shoes and salt. In 1836 Rathkeale was the largest town in the county. It had a large constabulary barracks, a courthouse, a gaol, a flour mill and a fever hospital. However the 1820 - 1830’s saw the end of this economic boom due to the lack of an active landlord, competition with foreign products, and the effects of the famine.

At the top of Rathkeale town are the ruins of Rathkeale Abbey, which was founded in 1280 by Gilbert Hervey for the Augustinian Canons of the Order of Aroasia. It is believed that the original building must have been destroyed for the present structure is not later than the 16th Century. In recent years the ruin has been perserved and the surrounding grounds landscaped and developed as the town's park.

St. Beinid's Well, Tobar Beinid, St. Benedicts Well, St. Bernards Well may be one and the same, is a large clear pool of water that is surrounded by ash trees. There are many different springs in the well that bubble up visibly into the pool, and locals say that the well has never dried up 'even in the warmest of summers'. The well is on the land of the Keating family and John Keating donated the altar that stands in the church ruin of St. Beinid. Large crowds still visit the well on August 20th, the feast day of St. Bernard, and on Good Friday.

It is claimed that water from the well can cure rheumatism, lameness and sore eyes. Rags can still be seen tied to the trees behind the well.

The Earls of Desmond used Rathkeale as a base and Castle Matrix, built as a fortress in or around 1410 by the Thomas Fitzgerald, 7th Earl of Desmond, was the principal stronghold of the Desmonds in the area.

The castle, which stands about a mile from the town, was erected in the reign of Elizabeth, and is a square castellated building, 90 feet high. It contains a display of art objects and holds historical records and is one of a series of significant Desmond properties in County Limerick.

The present church, which replaced an earlier building, was built in 1831 and is on a site that has been a place of worship since the 13th century. There are two important stained glass windows by O'Brien: The Sower (3 lights -1931) and St. Paul and St. Luke (2 lights -1937). The Church also contains a momument dating from 1676. 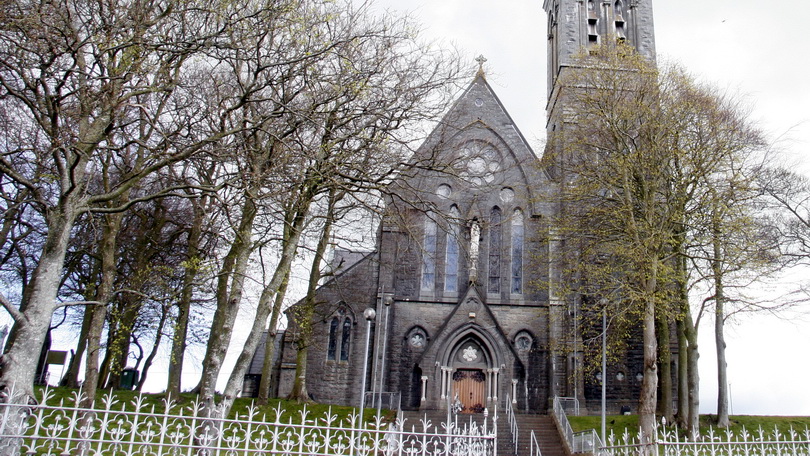 Designed by J.J. McCarthy, a pupil of Pugin, in Neo-Gothic French Norman style, and consecrated in 1876. The site, originally a house and grounds owned by Archdeacon Michael Fitzgerald was donated to the Christian Brothers in 1859. The brothers opened a school and remained in the town until 1880.

Of particular interest in the Church are stained glass windows in the apse with Coats of Arms, the carvings on the pillar capitals, including little animals on the pillars under the organ loft and the round window over the west door.

Rathkeale Community Centre, formally opened by President Patrick Hillery in 1983, is a landmark building in this west Limerick town. It served in the past as a courthouse and a Bridewell. Built in 1843, probably by Michael Fitzgerald, drawing on plans designed by the Limerick-based architect James Pain.

The four-bay, two-storey courthouse and Bridewell was built as a detached building with the court on the first floor and the prison below.

Ernest Walton, the Irish physicist and Nobel Laureate famed for splitting the atom, spent part of his childhood in Rathkeale. He was the son of Rev. John Walton, a Methodist minister who served in the area.

Sean (Jackie) Finn, Brigadier of the 4th West Limerick Battalion of the IRA during the Irish War of Independence, was a native of Rathkeale. His grave in the local graveyard features an impressive Celtic cross.

Christopher Lynch was born in Rathkeale in 1920, the youngest of six children of Patrick and Mary Lynch. The family lived in Church Street and a memorial plaque has now been erected on the wall of the former Lynch house.

Singing came effortlessly to the young Christopher, who was a member of St Mary’s Church choir. “All I had to do was open my mouth. I never stopped singing", Christopher Lynch said himself in later life.

His first break came when he successfully auditioned for a concert at Limerick’s Savoy Theatre, where his talent was spotted by members of the distinguished O’Meara family. With their support, Christopher went to Dublin for training with Dr. Vincent O’Brien, a renowned teacher and an early tutor of Count John McCormack.

He went to Italy to further his studies and began recording. It was his first, double-sided recording with HMV, featuring Macushia and Oft in the stilly night which opened American doors, prompting the invitation from tyre company Firestone to take over the lead role in their sponsored radio programme.

In late 1946, Christopher Lynch stood before an audience of 3000 in New York’s famous Carnegie Hall, and so began Christopher’s great American adventure, criss crossing the continent, broadcasting, giving concerts and recitals and mixing with the stars.

During these years, he returned to Ireland for a triumphant concert tour, the highlight of which was a concert in Dublin’s Gaiety Theatre where the chief guests were President Sean T. O’Kelly and Taoiseach John A. Costello.

Christopher Lynch Singing Bursary  is an initiative of Rathkeale Community Arts Group. It has been established to honour the memory and achievements of the lyric tenor Christopher Lynch. In offering a bursary, the group intends to offer support to a singer, male or female, aged 15 and upwards, with a genuine talent and interest in formal, classical singing.

The inaugural Séan Ó'Faoláin Weekend was held in Rathkeale November 2011 as a way of celebrating the links between the novelist, short-story writer and travel writer, Séan Ó'Faoláin and the town of Rathkeale.

O’Faoláin’s mother, Peg, was a native of Rathkeale and met her husband-to-be Denis when he, a member of the RIC, was stationed in the town. As a child, O’Faoláin spent his summers in Rathkeale, visiting relations on Roches Road and in the townland of Loughill East.

He was to write of these summer days in his autobiography, Vive Moi. His first novel, written in the 1930s, a Nest of Simple Folk, was set in Rathkeale.

The Séan Ó'Faoláin Short Story Competition is an annual short story competition open to writers around the world.