Roll Up Roll Up – Let’s go to the Circus this St. Patrick’s Day in Limerick

The theme of the 2018 Limerick St. Patrick’s Day Parade has been announced as ‘Circus 250’

The Circus celebrates a special birthday this year 250 years after entrepreneur and showman Philip Astley drew out a ring and began filling it with astonishing acts such as tumblers, rope-dancers, jugglers and clowns.

Every circus, anywhere in the world, began at that moment and over the past 250 years circus performers have been entertaining, inspiring and wowing audiences all over the world bringing joy and spectacle to our streets.

Who didn’t want to run away with the circus when it came to town?

Circus has become an important part of our experience of culture in Ireland, be it a trip to the Big Top, or the street performer during a festival.

These skillful performers from jugglers, clowns, acrobats and aerial artists to tight rope walkers, hoola-hoopers, fire eaters and contortionists have enlivened our lives and brought laughter and wonder to our streets.

So this St. Patrick’s Day, Limerick will be celebrating these heroes of circus, paying homage to their strange and wonderful skills and perhaps adding a few new skills of our own!

We are inviting you to root out those clown noses, get juggling those sliotars and join the circus for one day as we take to the streets of Limerick and celebrate Circus 250!

An estimated 80,000 people are expected to line the streets of Limerick City from midday on March 17th for one of Ireland’s largest regional St. Patrick’s Day Parades, which once again has Aidan Phelan as its creative director. 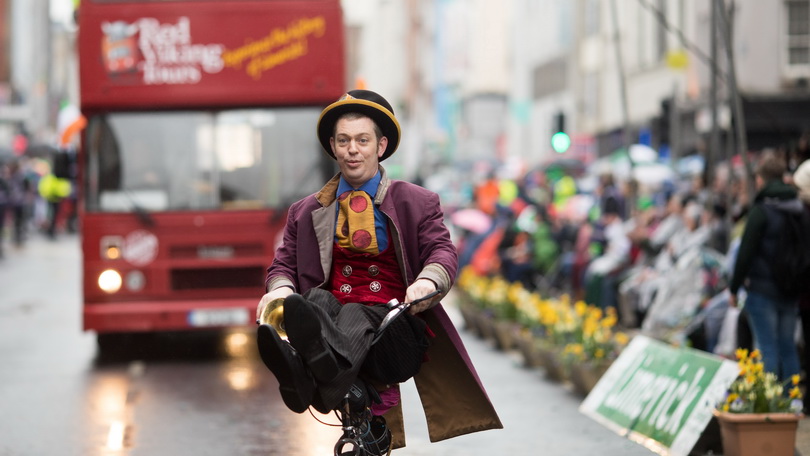 Mayor of the City and County of Limerick Cllr Stephen Keary said: “The St Patrick’s Day Parade is always very special. It is one of the highlights of the year and it allows us to show our pride in being from Limerick and being Irish. The parade in Limerick is truly a sight to behold. There is no greater sight than looking up O’Connell Street and see the waves and waves of colour marching down our premier street.”

Sheila Deegan, Culture and Arts Officer with Limerick City and County Council said: “I love the integrity of the creativity that groups who participate in the St. Patrick's Day bring to this civic celebration of our national day. I'm really looking forward to the colour, pride and innovation that will be embraced this year in the theme of Circus, celebrating 250 years since the art form began.”

If you would like to participate in this year’s parade, the first step is to complete the form which can be downloaded from www.Limerick.ie/stpatricksfestival/st-patricks-day-parade or from the links below.

Full details of the 2018 Limerick St. Patrick’s Festival will be announced in the coming weeks.