A major exhibition on the many ordinary Polish people who rescued Jews from the Nazi terror during the Second World War has officially been opened last night (Thursday 24 May 2018) in the Glazed Street of Limerick City and County Council’s Corporate Headquarters on Merchant’s Quay, Limerick.

Entitled Righteous Among the Nations, the exhibition is hosted by Limerick Museum and organised by the Janusz Korczak's Saturday Polish School in Limerick and the Limerick branch of the Military Unit of Jozef Pilsudski Strzelec.

The name of the exhibition is taken from the ‘Righteous Among the Nations" non-Jews who risked their lives to save Jews during the Holocaust and are given official recognition by Yad Vashem, Israel’s official memorial to the victims of the Holocaust. According to Yad Vashem, Poland has the largest number of ‘Righteous Among the Nations", with 6,700 representing one quarter of the total.

Many of these Polish rescuers risked their own lives and often did not survive their sacrifice. Poles carried out this rescue work as individuals and in groups; they were both lay and clerical; they saved children and adults; they provided shelter, food and false documentation.

Speaking at the opening of the exhibition Mayor of the City and County of Limerick Cllr Stephen Keary said: “Around 3 million Jews who lived in pre-Second World War Poland were murdered by the Nazis, representing half of all Jews killed in the Holocaust or Shoah between 1941 and 1945. The Righteous Among the Nations Exhibition illustrates how in extraordinary circumstances, many ordinary Poles sheltered, assisted and rescued Jews during this terrible era.”

“This exhibition is a description about solidarity, courage, and outstanding heroism, death, survival and remembrance of the Holocaust. Congratulations to the Polish community in Limerick for organising it and to Dr Matthew Potter, Curator of Limerick Museum for hosting it.” 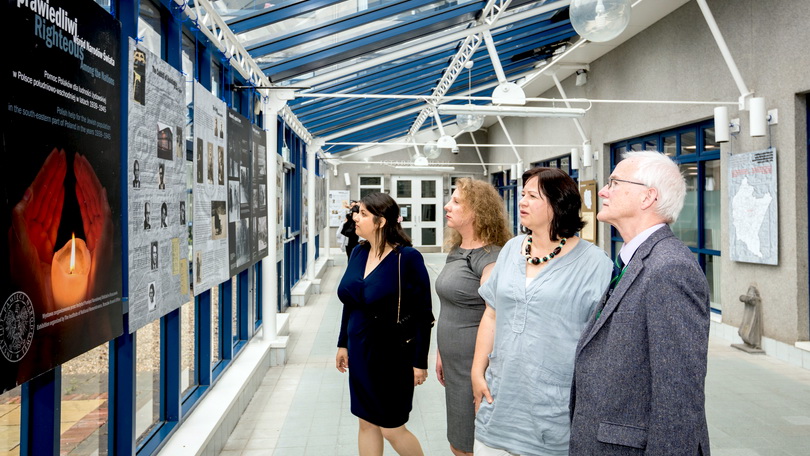 Dr Matthew Potter, Curator of Limerick Museum said: “Limerick Museum is delighted and proud to work with the Polish community in Limerick to mount this important exhibition. For four hundred years, Poland was home to the world’s largest Jewish community. The Jews of Poland were granted rights like nowhere else in Europe and were even granted their own autonomous legal system. As a result, three-quarters of the world’s Jews lived in Poland, which became known as the Jewish Paradise.”

In 1939, the Jewish paradise became the Jewish hell when the Germans invaded Poland. During the Second World War, one fifth of the Polish population, six million Poles were killed, half of whom were Jews.

The six children began to scream at the sight of their parents' bodies so they were also shot. The children were: Stanisława, aged 8, Barbara, age 7, Władysław, age 6, Franciszek, age 4, Antoni, age 3 and Maria, age 2. Wiktoria Ulma was expecting another child that was due to be born just days before the execution.

The Righteous Among the Nations exhibition will continue on the Glazed Street at Limerick City and County Council’s Corporate Headquarters on Merchant’s Quay, Limerick V94 EH90 until 8 June 2018. Opening times are 9am to 5pm Monday to Friday and entry is free.