Fortified by the waters of the Shannon and locally grown grain, Treaty City Beer is brewed by the inimitable Stephen. Discover his story.

For me its very important to have an eye to the heritage of the people of Park and the people of Limerick, so I always look back to that. I'd like to think I'm an innovator but my wife would say a gambler, she'd probably use a different term.

Limerick has a rich history in brewing. We use grain, its an all-natural process. We use water from the River Shannon and that's very important to us that the very lifeblood of Limerick that flows down through Limerick, is used in the product we make that we give out to the people.

I was living in Dublin in 2006 and it was quite busy in Dublin and then we decided, ‘lets go to Vancouver’. Its great to be away and its fantastic to live abroad in North America and in Australia, its really good to get those experiences but my people are from Limerick and that is where I was always going to come back to.

Limerick is a small tight neat city but it still has everything that the large city has to offer. Especially now, there is a hunger in Limerick, there is kind of a palpitation, a drive, with the Art College and with the music scene, there is a real nice counterculture or underground scene in Limerick. You really can role a dice in this city. There is a culture of acceptance for that experimentation.

Something very special happened when we created Treaty City Brewery. I got to work with my father building the brewery. In coming home from Vancouver, in moving back, that was a very special thing to do. To be able to work alongside him for a number of years and to build something that everyone loves is very special.” 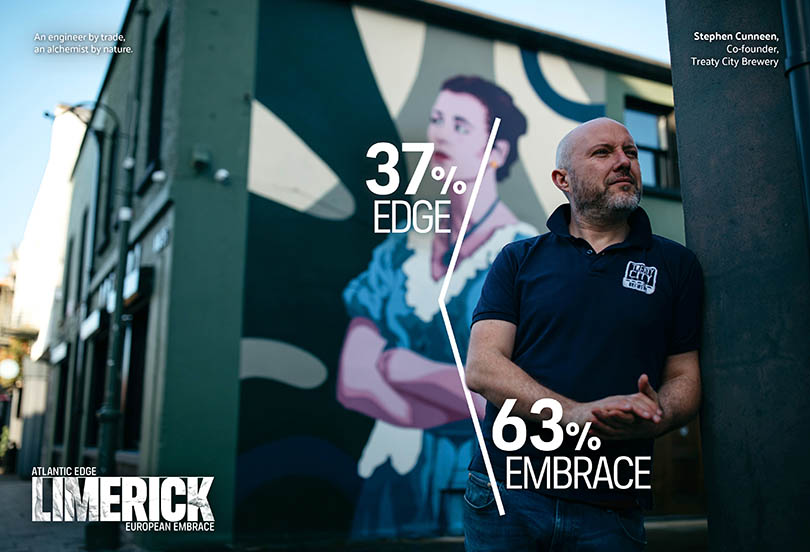