Around 75,000 people celebrate on the streets as Grand Marshal Marion Fossett leads out one of Limerick best ever parades.

The Queen of Ireland’s National Circus, ringmaster Marion Fossett led out almost 4,000 participants in what has been described as one of the most spectacular and colourful parades ever in Limerick.

The theme of the parade this year was Circus and around 100 community groups and sports clubs brought the theme to life, along with some of Ireland’s best street theatre companies.

Gardaí estimate that around 75,000 people enjoyed the festivities, as the rain held off.

The School of Spectacle worked with world renowned street theatre company Walk the Plank who brought their 'Whirling Wings Circus’ to the parade. The entry was created by 25 local and international creative practitioners over the past week and featured still walkers, who walked the entire two kilometre route.

LUXe presented their award winning “Cirque de Lune” with a highly skilled aerialist performing in a hoop suspended from their sky hook and another performing high in the air on a Chinese pole while a third performed high above the crowd in the Empress Tower. It was led by an exotic circus master riding wildly on his mechanical horse!

Award winning Macnas’ entry was a nod to the early travelling sideshows. High up her tower the Ring-mistress hailed the arrival of her band of mischievous and musical minstrels and her wonderfully whacky troupe of circus sideshow performers.

Hundreds of young children from community and sporting groups across the city and county enjoyed the cheers of the thousands of spectators along the two kilometre route, which stretched along O’Connell Street from its junction from Roden Street to Rutland Street. 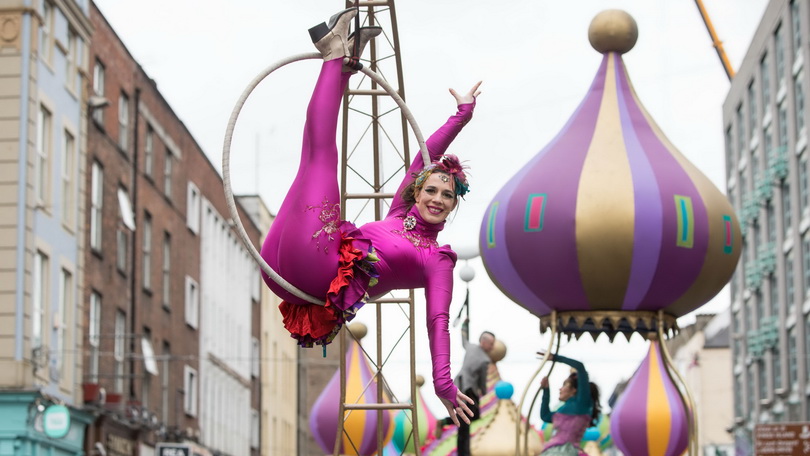 A judging panel made up exclusively of children decided the parade winners.

Deputy Mayor of the City and County of Limerick Cllr Marian Hurley said: “Today has been an amazing spectacle and a credit to the organisers. I loved the theme of Circus this year, it was inspirational. It’s 250th anniversary of the Circus and 130 years of Fossett’s Circus. It was just lovely, every group seemed to carry that theme right throughout the parade. It was very colourful and the theme brought that right throughout the parade.”

“We had such wonderful artistes such as Fidget Feet and Macnas and all the other big names, we’re thrilled with our parade in Limerick.”

“I also want to pay particular thanks to the people of Limerick city and county who came out in such numbers and supported the parade despite the cold weather,” the deputy mayor added.

Limerick St Patrick's Festival 2018 continues over the weekend, with a series of events celebrating our National Holiday.

More than 1,300 participants in 21 bands from around the world will take part in the 48th annual Limerick International Band.

Ireland’s only international band competition will start from O’Connell Street’s junction with Hartstonge Street at 12 noon.

Dramatic illuminations will be projected onto the historic castle, followed by a spectacular fireworks display which will transform the city’s skies into an explosion of colour! This promises to be a tremendous treat for the whole family.

More than 30 events are taking place as part of the Limerick St Patrick’s Festival 2018. For all events visit www.limerick.ie/stpatricksfestival.