Measurement of footfall (pedestrian counting) can be a major indicator of urban and rural activity and the success of initiatives and events. Limerick City and County Council has introduced pedestrian counters in Limerick City centre to capture data needed for design and development as well as in two locations in the county.

The first counter was installed in May 2016 on the main intersection O’Connell Street and Sarsfield/William Street and there are now five locations in core downtown areas, Michael Healy, Data Analytics and GIS Manager at Limerick Digital Strategy, summarised.

One of the first practical applications of this data was part of Limerick’s bid to gain a Purple Flag—an international accreditation for towns/city centres in the evening and at night—which it did in January 2017. The information can also be useful for tourism and forward planning i.e. for retail development. It will also be used to asses the footfall before, during and after the O’Connell Street remodelling project. It really provides evidence (and not hear say) of how well the city centre is utilised.
With the city sites “a lot of the data is live and updated every 15 minutes; any less is unnecessary and if it’s any more, you lose that finer level of detail,” said Michael, adding that some counters may only need to update hourly or daily.

LCCC has also added a pedestrian counter in the town of Kilmallock, east Limerick, and also on a county walking trail. The Smart CCTV Pilot Project will also generate pedestrian counting data and other statistical information in each of the 14 towns, a true reflection of the Smart Limerick Region that uses data to make better decisions.

“The information will be more valuable as the years go on because of the ability compare and contrast” he said.

LCCC is currently working on making footfall data live on the Insight Limerick website so it will be updated several times an hour and users can view it. In time, the pilot may be expanded depending on how useful the information is considered—particularly for decision-making, within the local authority and outside. A wider scale roll-out of pedestrian counting is planned for 2019. 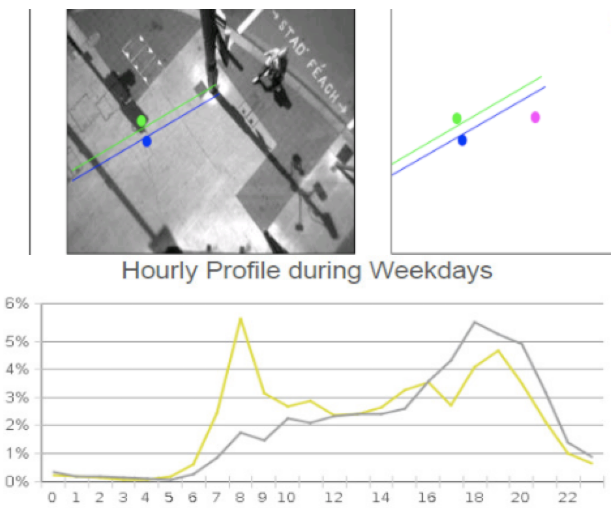 Photo: The high-precision pedestrian counting at the junction of William Street/O’Connell Street uses thermal imaging to “count” movements and crossings of virtual lines.