Limerick has proved the place to be this May Bank Holiday weekend with more than 120,000 people celebrating the city’s biggest festival Riverfest, bringing an estimated €7million into the local economy.

The water-based activities saw huge numbers enjoying the popular double zip line across the River Shannon while zorbing, kayaking, dragon boating and a social swim had many getting a different perspective of the great river.

High above the river, aerial performers Fidget Feet brought the world of the Shannon Fishermen to life with amazing displays of aerial acrobatics, while mermaids riding seas horses also enthralled the crowds during the festival.

Riverfest Limerick 2019 from Limerick.ie on Vimeo.

A spectacular light show by Fidget Feet on Sunday evening heralded the start of the now traditional Riverfest Fireworks extravaganza. Thousands lined the quays and strands around Limerick to catch a glimpse of the 20 minute show as the skies were lit up in what has become a firm favourite of Riverfest weekend.

Earlier on Sunday there were fireworks of a different kind as 14,000 people participated in the Regeneron Great Limerick Run as the marathon, half marathon and 6 mile distances were covered by the athletes through the streets of Limerick.

One of the most popular attractions at the festival was the LE Eithne naval vessel where thousands of people enjoyed a tour of the Irish ship.  For many it was the first time behind the walls of Limerick Docks and, with thanks to Shannon Foynes Port Company, gave them a glimpse into the operations of a working port, as well as pretending to be a member of the Irish Naval Service.

The boardwalk on Howley’s Quay was the location for the now traditional BBQ on Saturday, with companies and charities from across Limerick and Mid-West cooking up a storm for the hungry spectators.

Mouth-watering burgers and sausages as well as tempting brightly coloured and inviting vegetarian options were on the menu.

Of course, the BBQ was a competition with the Overall Winners the Carriage House Pirates, Adare Manor, Best Dressed entry was Sexton’s Bar and Pizza, while Southill Drama Group were the most entertaining entry.

The BBQ prizes were thanks to A Room Outside.

And as always the Riverfestival Village centred in Arthur’s Quay Park and stretching this year along the river to the Hunt Museum and on to the Potato Market, welcomed the thousands of people who enjoyed the entertainment, fun and shows of Riverfest including a 40ft Panoramic Wheel, carnival rides and music.  This year a chillout zone was set up in the Hunt Museum for those who wanted to unwind but still enjoy Riverfest and was supported by the Limerick Autism Group. 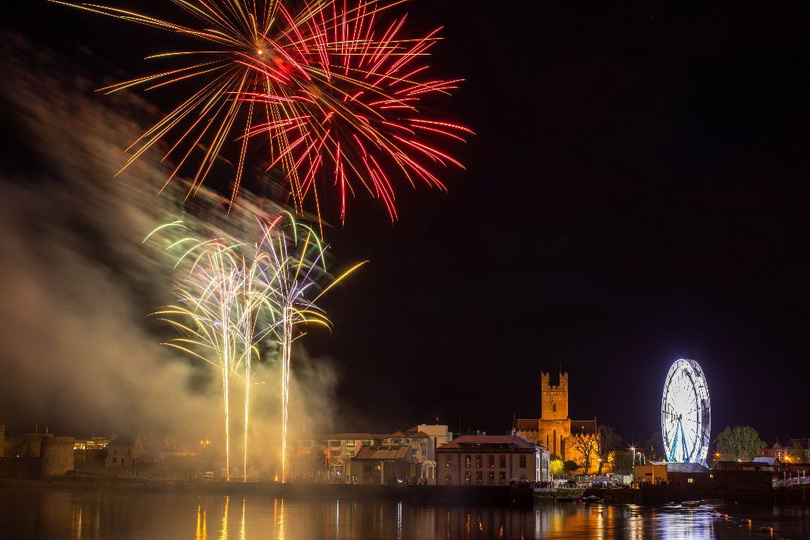 Mayor of the City and County of Limerick, Cllr James Collins said: “Riverfest showcases Limerick to its fullest and best.  There was such a fantastic atmosphere around the city with everyone enjoying themselves.  From the Riverfestival Village to Fidget Feet high above the River Shannon and the water enthusiasts there was just so much happening and plenty of free activities and events to keep all ages happy.”

“Riverfest has proved itself to be a great festival and one to be proud of.  The weather was a great incentive for people to come out and support the events, with thousands lining the streets cheering on the participants in the Regeneron Great Limerick Run, or visiting the LE Eithne in Limerick Docks and of course the traditional fireworks extravaganza.”

Sheila Deegan, Culture and Arts Officer, Limerick City and County Council said: “The streets of Limerick were alive and kicking for Riverfest 2019 under a canopy of glorious sunshine.  Family and friends found time to share experiences on, in and around the majestic River Shannon. The amazing party atmosphere was added to with fantastic creative content that showcased Limerick’s cultural community at its best, particularly the spectacle performances high above the River by Fidget Feet.  It’s so rewarding to have had many clubs and associations bring their unique offering to the festival this year using the platform of Limerick’s biggest festival to celebrate our maritime heritage.”

Laura Ryan, Head of Marketing and Communications, Limerick City and County Council said: “Limerick was absolutely buzzing for four days and we can see first-hand the impact that festivals and large scale events have on our city from the thousands who flocked into Limerick to enjoy the festivities over the last few days. Riverfest continues to grow in scale, ambition and visitor numbers, with many already putting the date in the calendar for 2020.”

For full details of all events and times please see www.Riverfest.ie to download your full guide.

Riverfest Limerick 2019 is run on behalf of Limerick City and County Council by Grooveyard Event Management.