Currently, there are five sections to the Limerick Greenway; Rathkeale to Ardagh (10km), Ardagh to Newcastle West (4km), Newcastle West to Barnagh (10km), Barnagh to Templeglantine (4km) and Templeglantine to Abbeyfeale to the Kerry border (9km to Abbeyfeale & 3km to Kerry border). In late 2021/early 2022 a section of the North Kerry Greenway will open linking to the town of Listowel.

As part of our €5million upgrading works to the Limerick Greenway, Limerick City and County Council is undertaking an extensive programme of resurfacing works and a number of sections of the Greenway have been temporarily closed to facilitate these works. Apologies for any inconvenience caused.

On Tuesday 22nd December the section Rathkeale at the Irish Palatine Heritage Museum to the Ardagh Station House will reopen.

Limerick City and County Council wish to advise of the following Temporary Closures on the Limerick Greenway and the proposed opening dates: 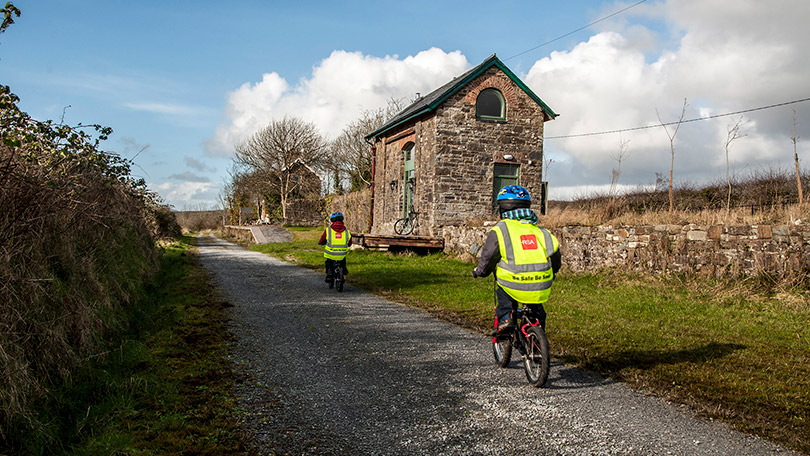 This is a level section, which begins in the market town of Rathkeale (Irish Palatine Museum/ Greenway Carpark) and crosses the River Deel. Five beautiful cut-stone overhead bridges are passed along the way. Just before the third one, you will see the ancient churchyard at Clounagh and the ruins of the 15th century Lisnacille Castle in the distance.

On the approach to the fourth bridge, a local road to the right of the greenway leads to Cahermoyle House, which has associations with William Smith O’Brien, leader of the 1848 Young Ireland Rebellion.

The fifth bridge is at one of the Greenways Discovery Points, Ardagh Station from where the village, St. Moula’s Well and the old fort where the Ardagh Chalice was found in 1868 can be visited. The stationhouse has been partly restored by Limerick City and County Council and has car parking facilities (from Summer 2021)

This section is level at each end with a slight dip in the middle. It passes through farmland surrounded by hills. As Newcastle West approaches, the River Daar is bridged before proceeding on to the site of the old Newcastle West railway station (by crossing Station Road). Only the restored station house (now a private home) and the mature oak trees which lined the approach avenue from Bishop Street survive.

Newcastle West is the largest town in County Limerick with an array of cultural and historical places of interest to visit and a wide variety of places to eat and relax.

Gently uphill all the way, this section represented one of the most arduous challenges in the age of the steam train. The greenway climbs into the Rooskagh Hills and rewards visitors with breathtaking landscapes as you reach the Barnagh viewing point, one of the highlight discovery points on the route. Here you can pause for a rest, taking in the stunning views of the Limerick Plains and Golden Vale.

The route traverses two more of the Greenways Discovery Points, the Ferguson’s Viaduct and the recently restored Barnagh Station (Summer 2021). The trains entered Barnagh Station through the Barnagh tunnel, now restored as part of the greenway route with the addition of a link under the N21.

This section passes through cuttings and embankments and under two stone bridges. The village of Templeglantine becomes visible on the left and is reached along the L21006.

Templeglantine is a good stopping point taking in some historical sites such as Glenquin Castle (restored), Killeedy Castle (ruin) and St. Ita’s Churchyard.

Opposite the church the L21006 leads to the greenway where a left turn is taken for Abbeyfeale. After 2km Tullig Wood Discovery Point is entered and its tranquil atmosphere is another highlight of the greenway.

A little further on the restored station (private) at Devon Road is passed, once serving a local creamery. The greenway now levels out as it comes parallel to the River Allaghaun and accompanies it all the way to Abbeyfeale. Pass under the stone bridge and travel a further 2km where the station  (private) at Abbeyfeale is passed. You can turn left here onto the R524 for the town centre of Abbeyfeale, the home of the Fleadh by the Feale and key location on the Sliabh Luachra Music Trail. There is also a carpark available for those who wish to start their Limerick Greenway discovery from Abbeyfeale.

If you continue on towards Kerry you will cross the River Oolagh and pass Purt Castle (ruin) and the River Feale on your left. In late 2021/ early 2022 a section of the North Kerry Greenway will open linking to the town of Listowel.