Due to Covid-19 Level 3 restrictions across Ireland, Eva's indoor venues are closed until Wednesday 28th October (subject to government guidelines). Phase 1 of the 39th Eva International programme continues online and in outdoor spaces.

Originally scheduled as a concentrated 10 week programme, and as part of European Expo 2020, the 39th EVA International will now be delivered in three phases that will take place across various venues in Limerick city between 2020 and 2021.

This approach has been developed as a practical response to the consequences of Covid-19, ensuring that EVA International upholds its commitments to artists and audiences in a way that is sensitive to ongoing public health concerns.

Phase 1 of the 39th EVA International will open on 18th September and continue until 15th November 2020. The Phase 1 programme will include venue-based, online and offsite, presentations by artists including Bora Baboci, Yane Calovski, Eirene Efstathiou, Laura Fitzgerald, Michele Horrigan, Melanie Jackson and Esther Leslie, Áine McBride, Emily McFarland, Eimear Walshe, Driant Zeneli, and Women Artists Action Group. Venues include Limerick City Gallery of Art, The Hunt Museum and the Sailor’s Home.  All venues will be subject to protocols to ensure the safety and wellbeing of the visiting public, adhering to current government guidelines for cultural venues.

The 39th EVA International programme is being developed in reference to the Golden Vein, a 19th century descriptor for the bountiful pastures of the Limerick / Tipperary region in the Mid-West of Ireland (more commonly referred to today as ‘Golden Vale’). The reference belongs to the historical perspective of seeing the land as a resource to be tapped, exploited, and commercialised through industrialised agricultural production and global trade. The Golden Vein is the starting point for thinking through ideas of land and its contested values within the context of Ireland today.

For full details of the Phase 1 programme click here.

Guest Programme - Little did they know

Curated by Merve Elveren, Little did they know is the Guest Programme of the 39th EVA International. Across all three phases of the programme, it will feature over twenty Irish and international artists and four ‘research projects’ presented in various venues in Limerick City and online.

Maybe the Cosmos is not so extraordinary, 2019.
From the trilogy Beneath a surface there is just another surface, 2015 - 2019.
Sailor's Home, O’Curry Street.

Set in the mines of Bulqizë, the three-channel video installation Maybe the Cosmos is not so extraordinary recalls Albania’s contentious history of chrome extraction. Through the journey of five children, Zeneli playfully mobilises excerpts from Arion Hysenbegas’s sci-fi novel On the way to Epsilon Eridani, 1983, to a fauxpropagandistic end, bringing forth promises of liberation as well as a utopian future.

It would not be possible to leave planet earth unless gravity existed, 2017
From the trilogy Beneath a surface there is just another surface, 2015-2019.
Sailor's Home, O’Curry Street.

Zeneli’s video work visits the imposing industrial complex Çeliku i Partisë [Steel of the Party]—one of the relics of the historical alliance between Communist Party of China and the Party of Labour of Albania. The video follows Mario, the protagonist, journeying through this dystopian site, revealing the social and political failures of the project, as well as probing alternative modes of space travel. 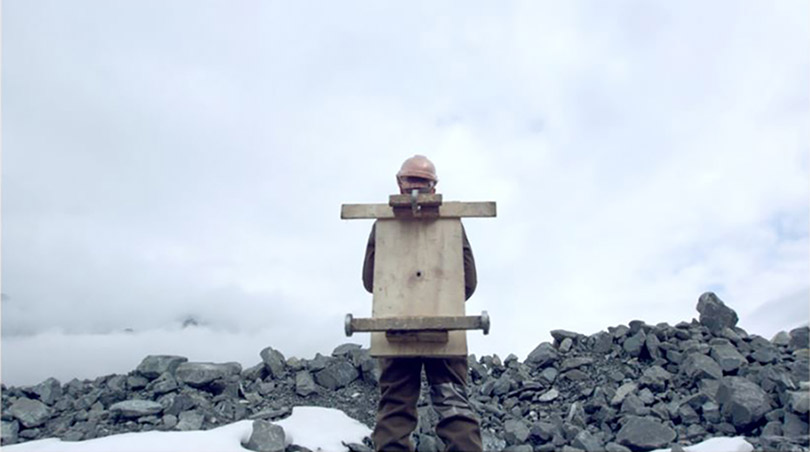 Horrigan’s ongoing work Stigma Damages reflects on bauxite, a mineral ore that is imported from Africa by Aughinish Alumina Refinery (Ireland's largest industrial complex) located in Askeaton, County Limerick. Through archival objects, documents, and videos that follow the trail of bauxite, Horrigan reveals how it connects to discussions of class, gender, ecology, and value.

WAAG was founded in April 1987 as a reaction to the exclusion of women artists from key local and international exhibitions. That same year WAAG organised a photo slide exhibition at the Project Art Centre, Dublin, of works by 91 women artists working in Ireland - a strategy of exhibition-making much ahead of its time. The material presented here is drawn from the collection of Pauline Cummins, held at the National Irish Visual Arts Library (NIVAL), Dublin.

The Inextinguishable, 2020
Limerick City Gallery of Art and other venues

Jackson and Leslie’s illustrated pamphlet, The Inextinguishable, is the latest in their ongoing collaborative exploration of milk. Their work studies milk as a substance that is both primal and subject to the latest biotechnological developments, intersecting political, colonial, and gender histories. Copies of The Inextinguishable are free to take away.

A Jagged Line Through Space is a speculative commentary on placemaking. Using the question “Is Exarcheia an island?,” as her jumping off point, Efstathiou juxtaposes her personal archives with collective experiences, and offers an unconventional journey through Exarcheia, a politically charged neighbourhood in Athens. This series of mixed media works on paper and linen carefully examine the complex roles of societal actors and how they are negotiated in public spaces.

The installation integrates Calovski’s recent work Personal Object (2020) and his earlier works, emphasising the intertwining of personal, societal, and cultural narratives. The work draws reference from a number of sources, including instruments of societal control through to objects once belonging to his mother and forms inspired by the teachings of architect Oskar Hansen.

It’s Not for You We Did It
Online

A series of online research dossiers dedicated to the social and cultural context of Derry from the mid-1980s to the early 1990s. It maps various networks of relationships that were formed by individuals and groups that shared common concerns of self-representation and resistance. The project forms part of the Derry Film and Video Workshop research project led by curator Sara Greavu in collaboration with Ciara Phillips.

A dedicated website for Little did they know launched on 18th September 2020, featuring additional research contributions and artists’ responses. 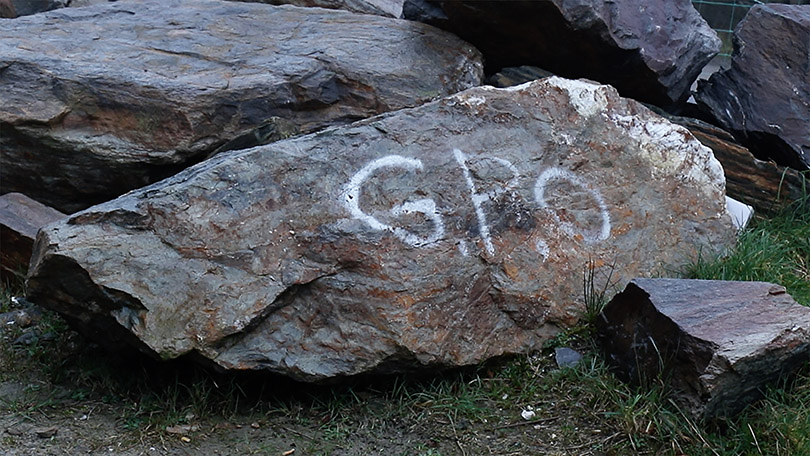 Platform Commissions is an initiative by EVA International to support the production of significant new works by artists based in Ireland. Selected for the 39th EVA International by Anne Tallentire (artist), Merve Elveren (curator), and Matt Packer (Director, EVA).

Laura Fitzgerald’s installation is the latest in the artist’s ongoing exploration into the personal and political tensions that exist between rural Irish life and cultural internationalism, featuring two large-scale ‘hay shed’ audio-enclosures and a series of drawings that depict micro-dramas of provincial insecurity.

McBride’s sculptural works at the Sailor’s Home are subtle interventions that are both integral and interrogative to the fabric of the historical building, originally designed as a resting place for international sailors. Accompanying the sculptural works are a series of photographs presented in bespoke frames, distributed across various locations in Limerick City.

Curraghinalt is the first work in a three part video series that makes visible and bears witness to the changing ecology of a particular landscape in the Sperrin Mountains of West Tyrone, in the North of Ireland.

The Land Question: Where the fuck am I supposed to have sex?, 2020
EVA Offices and Archive, 46-47 Catherine Street & online.

Walshe’s video presents a brief history of land contestation in Ireland, and questions how the history of land relations persistently impacts our most intimate thoughts, aspirations, and interactions. The research presented in this video serves as a primer for video works to be presented by the artist in phase 2 and 3 of the biennial programme. With soundtrack by The DOE and featuring Ian Lynch.

How much no thanks is a billboard on the junction of John’s Street and Quinn’s Lane, drawing on a series of images by the artist addressing the relationship between housing, sexuality and Irish colonial history. The billboard image references the artist’s video work on display at EVA Offices and Archive.

Predictions is an audio work by Tiranabased artist Bora Baboci that was produced following a period of residency in Limerick City, where the artist was struck by the turbulent and unpredictable nature of the River Shannon. Taking the Curragower Falls as its main subject, the audio script uses tidal charts and fantasy fiction to create a forecast of the river run dry, predicting both bureaucratic and folkloric consequences for Limerick City.

An interdisciplinary project developed with students from the Fine Art Programmes at Limerick School of Art & Design, exploring the ecologies of Limerick’s People’s Park through themes of SOIL, PLAY, and SHELTER. 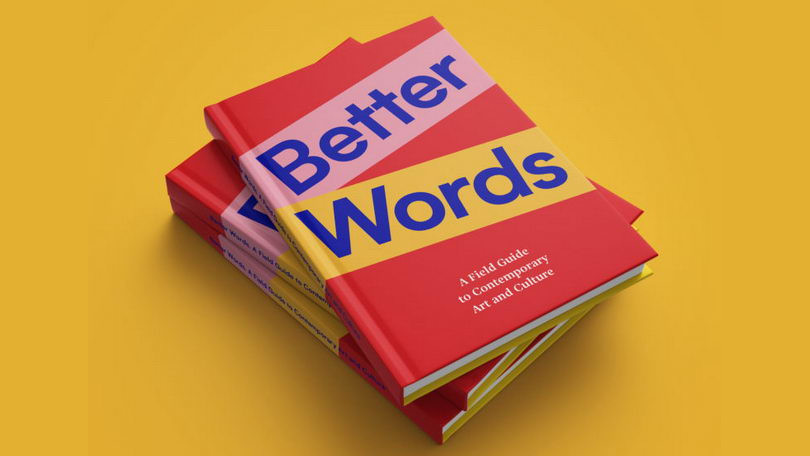 Better Words is an initiative by EVA International to empower new forms of access and engagement with contemporary art through a programme of creative language projects.

A series of audio tour podcasts produced by multilingualists in the Limerick region, providing a creative mediation of the biennial programme for under-represented language communities. Available online at eva.ie from October 2020.

A publication developed with five schools across Limerick city and county through a series of guided workshops and artistic encounters at leading artists’ studios, museums and galleries. The Field Guide contains a new vocabulary for contemporary art from the perspectives of participating school children. Supported by Ireland’s National Creativity Fund. Copies are available to view or purchase at EVA’s Offices and Archive. 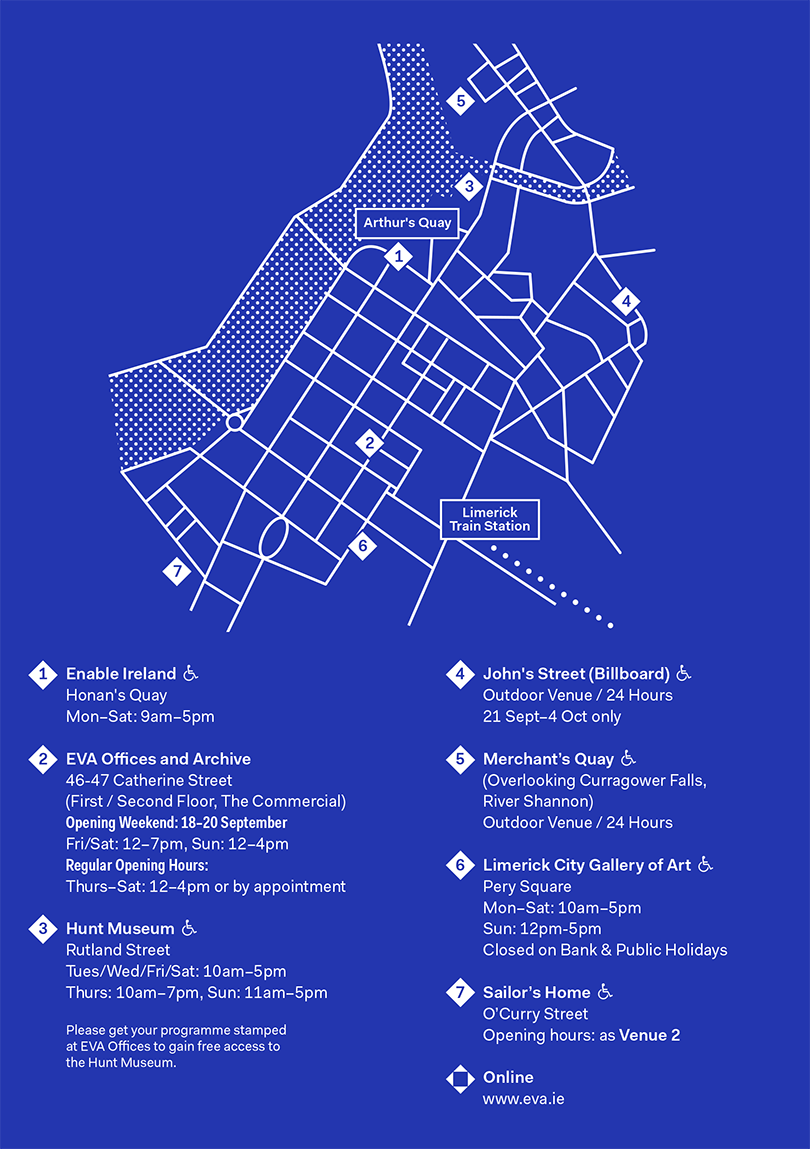 Online and various locations in Limerick.