Cast your mind back to the excitement of Limerick City of Culture 2014 – beneath the noise, the colour and fanfare of the many outstanding events of that year, some very important seeds were being planted for the future of art and culture in the city.

One of these seeds was Troy Studios, Ireland’s new international film studio, which now resides in the old Dell site in Castletroy. From murmurs and rumblings, to the confirmation that an agreement with the founders and directors of Troy Studios had been reached, to the expected completion of the studio conversion due in the coming months, we have all been following the story closely.

So, where did it all begin? TLM met with Mike Cantwell to find out what went on ‘behind the scenes’…

Back in 2014, Limerick City and County Council established Innovate Limerick, a public private partnerships company set up to drive innovation, and as Mike puts it “to act as a catalyst. We work on special projects of innovation and regeneration, including those lined out in the Limerick 2030 plan.” And it was Innovate Limerick, and Mike himself who were in talks with the directors of Troy Studios from the very start. 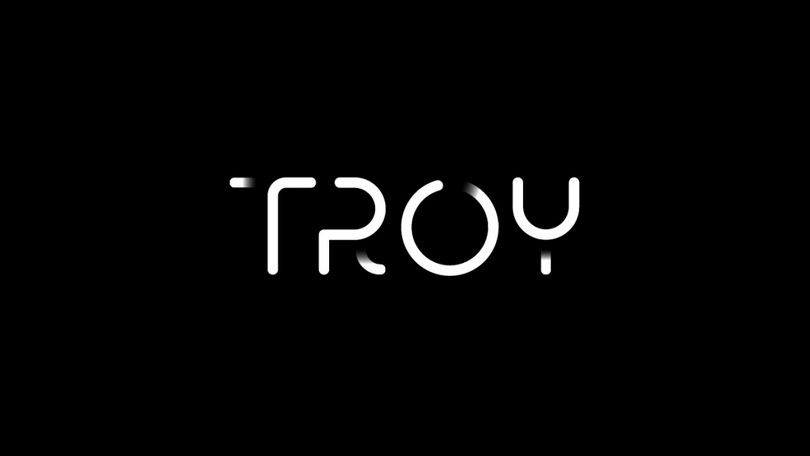 “The directors of Troy came to visit Limerick during 2014 City of Culture, specifically to look at potential space for the new studio. During their time here we showed them three sites – LEDP, the former Dell site, and another on the edge of the county near Clare. We were very interested in developing a partnership with them – and they were in turn very interested in working with us.

I followed up those conversations with an email in January 2015, and they came back to say that they were considering the Dell site and would like another look. What followed then was a lot of meetings both here and in Dublin to see how we could make this happen. What stood out from the start was the strong willingness on both sides to see it through. From the Limerick side all the city councillors, City of Culture committee, Conn Murray, all were very instrumental with their willingness to make it happen.

We looked at what was required from our side, and in July the council decided that the best option would be to buy the site from its owner Peter Noonan, and then lease it out to Troy Studios. We negotiated and they entered into the lease. So that’s our role – Troy Studios are tenants of Limerick City and County Council.”

That said – Innovate Limerick is not just limited to a typical landlord role. Due to the nature of these very unique and special tenants, Mike and the team have been working very closely with Troy Studios on the designs, layout and costings of the entire studio project. “The design was ready at inception – Siun Ni Raghallaigh, the CEO of Ardmore and Troy Studio Director, would have done a lot of actual design and layout. It had to be done at that early stage, we all needed to have an idea of cost, how it was going to work, what would and wouldn’t be possible.” 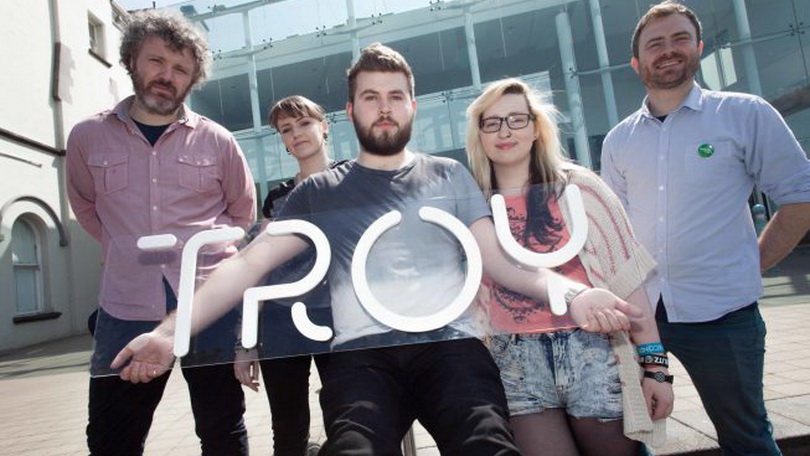 Even at this stage, with the negotiations done, the lease entered and designs and cost all laid out, nothing was certain. “Once we’d entered an agreement, expressions of interest for Troy Studios came in from Cork, Galway, and elsewhere.” What was it that really clinched it for Limerick? Mike cites a number of factors, starting with the structure of the building itself. Before we enter the meeting room at LEDP, Mike shows me the work going on in the centre, which is host to a number of tenants, and will be accommodating many more. For scale: LEDP is around 35,000 sq ft of space.

Troy Studios is 340,000 sq ft in total, “70,000 of which is high bay 15m to the eaves”. Mike explains that the height of this space was the clincher for Limerick and the Dell site. “It was an efficient, cost effective space. That’s what made the building so attractive to them; this was the ace up our sleeve.” Why did this excite the directors of Troy so much? “The height allows for two storey stages, in film making everything is about efficiency – if filmmakers can build double deck sound stages or sets, it allows for more efficient filming. So right now we have 70,000 sq ft of 15m to the eaves space divided into three film sets – two at 16/17,000, other at 35,000.

In just one project we’ve doubled the movie making capacity of entire country. Troy Studios is twice the size of Ardmore, so it’s a serious piece of national infrastructure.”

There seems to be a real buzz around filmmaking in Ireland, from successful short films, to ground breaking animation studios, right up to huge Hollywood franchise Star Wars. The demand certainly is there for film in Ireland, why does Mike think that is? “The fact is Ardmore is booked up for the next three years. There is globally a huge demand for spaces to film. World demand for content is rising every year – there was over 300 hours of content commissioned by Netflix alone – that’s just one company.

In the digital age people are looking at film and TV series’ on phones, the appetite is growing at substantial rate, and it’s growing faster than space is. Ireland happens to be particularly attractive in part due to the tax breaks companies get here. There was a shortage of quality space in Ireland, and specifically with Troy Studios coming here to the Dell site; this is most cost effective way of filling that void.”

60% of the work to convert the site into a fully functioning international film studio is now complete. It has been reported that a major filming project is already set to begin in 2016. So I ask the million dollar question: Can Mike tell us what will be filmed there? “I’d love to know myself! Right now for Troy it’s a bit of a two edge sword. We are working on the basis that studio will be complete in August 2016, and the programme is on course. But like with any production, people are not going to commit 100% to the location until it is 100% complete.

So at the moment I don’t know. What I do know is that there are indeed a number of expressions of interest to film there in progress.” And of course, the work on Troy Studios won’t stop with the conversion of the site. “The immediate challenge once film productions are firmed up will be to provide crews.  That’s why training programmes are another major priority right now, we have many skilled people in the area but we don’t have a history of filmmaking at this scale.

It is our ambition and hope that we will be able to train up crews staffed by people from the Midwest by the year 2020. With the city potentially also being European Capital of Culture that year, the impact would be substantial on city on whole number of levels. You might be surprised to find out that have more artists per head of population than Galway. Having Troy Studios here brings a whole other level of creative opportunity.”

It seems apt that Granny was based there at the site and learned to walk before City of Culture 2014, it’s where the journey began for Limerick’s revival. 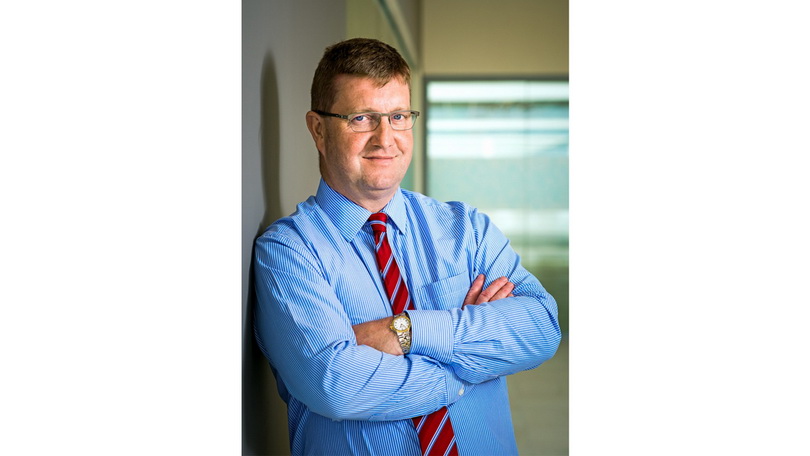 “That’s true, and the opportunities for local workers created by the studio are limitless. For day to day workings of a film studio you need everything from makeup artists and costume designers to post production and digital animation, to architects, engineers, carpenters and plumbers. Innovate Limerick will have a key role in building new training and job opportunities to areas of regeneration in Limerick.

It will be a real benefit to regeneration areas and beyond, as the range and type of skills required to operate a film studio will be attractive to people from across regenerate areas, into the county and rural districts. We’ve been working closely with Limerick and Clare Education and Training Board, Screen Ireland, the Irish Film Board, UL and LIT in planning training programmes to covert people with trades to allow them to work in film industry.” So, it cannot be underestimated just how many employment opportunities Troy Studios will provide.

“Limerick has been doing very well attracting IT companies and the like into the city but this is different level all together. It will allow people to bring their skills and talents to a whole new area of creativity. Filmmaking is creative at its heart and at the heart of a city we need to have arts and culture, the city needs to have a soul.”

Already local people are being involved in the creative process, with Troy Studio directors working alongside local company Piquant Media and LSAD to create their brand identity. Director Siun Ni Raghallaigh said at the unveiling that Troy will “become a part of the fabric of Limerick” and that they were “delighted to have the opportunity to partner with LSAD and local talent.”

Piquant Media, who have also played a key role in the Limerick2020 bid, worked closely with Sian to develop the brand identity. The final concept selected (pictured) was by LSAD students Tara Sheehan, Kevin McInerney and Aislinn McGrath.

As well as regeneration and employment opportunities, there will of course be enormous benefits to the hospitality and tourism sectors. “Once filming starts they will need accommodation for crews, and holidayers will of course be attracted to stay nearby because hey, you never know who you might see on the streets!”

There are many big tasks ahead for Troy Studios, but from his experience working with the directors and other collaborator Mike believes they are very achievable. “Already we have had small sign of what is to come – at the end of June we had the international training programme Screen Leaders happening here in Limerick, attended by international film makers, all because we have an international film studio right here. The future is very exciting.”