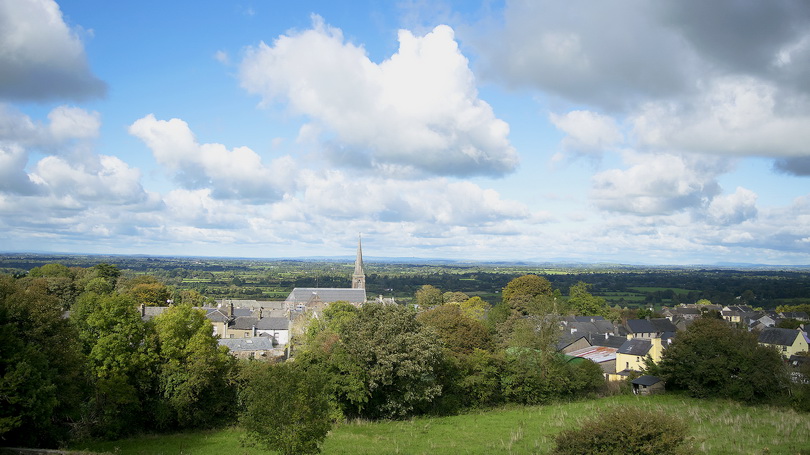 Saint Finnian founded a church in Kilfinane in the seventh century. According to the Civil Survey of 1654-56, the village had 50 thatched houses and cabins, a castle, church and mill. In 1837 the parish had a population of 4,437, of which 1,752 lived in the town.

Kilfinane, which is surrounded by mountains on its south, east and west, owes much of its present layout to the Oliver family. They acquired 6,500 hectares of land in this area from Sir Edmond FitzHarris (whose ancestors had owned it since the 13th century), when the FitzHarris lands were confiscated by the Cromwellians in the 17th century. The Olivers remained in ownership of the area for the next two centuries, during which time they commanded a local military force, held seats in parliament and acted as magistrates in local courts. 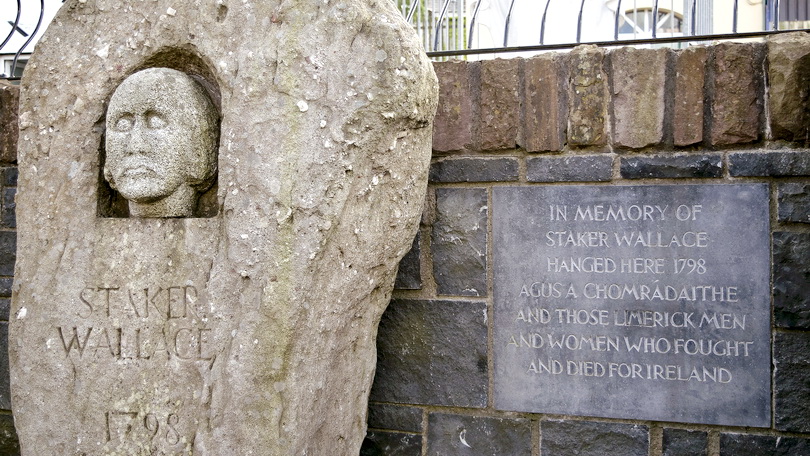 A stark memorial stands in the square commemorates Patrick Staker Wallis, who was executed in Kilfinane shortly after the 1798 Rebellion. Wallis was a member of the United Irishmen, whose rebellion was one of the bloodiest in Irish history. He was captured by Captain Charles Silver Oliver, who had him repeatedly flogged and tortured. After considerable brutality over several days, Wallis was hanged and his severed head displayed on a spike over Kilfinane Market House.

Kilfinane, once a seat of the kings of Munster, and the moat a ceremonial mound for the crowning of kings. Over 10m high, a hill fort, affording broad views of the surrounding countryside, and is said to have been strengthened by Brian Boru.

This oatmeal mill was once a bustling complex. It later expanded into flax weaving, tweed making and related enterprises. The Olivers, who ran the mill during most of its existence, also had other mills at Ardpatrick and Rockmills, near Kildorrery. However, Kilfinane Mill was destroyed by fire in 1940, after which most of its buildings were demolished. Among its few surviving features is a chimney stack of brick.

This Roche castle was attacked by Cromwell's army during the mid-1600’s. The Cromwellian’s killed all who defended the castle. They then rendered it defenceless by breaching holes in its walls and removing its battlements.

Saint Andrews Catholic Church is a wonderful Gothic Revival building designed in 1878, by George Ashlin (1837-1921). Ashlin was one of the best Irish architects of his generation. He also designed the adjoining parochial house.

The ruins of Saint Finnian pre-Reformation Church, which was used later as the protestant parish church, can be found in the old graveyard. It is surrounded by dozens of headstones, a few of which date to the 18th century.

Courts Leet and Courts Baron were held in the Market House, a large and commodious building which dates to the 18th century. With jurisdiction over the lands of the Manor of Kilfinane, the courts dealt with legal and land ownership issues. Fairs and Tuesday markets were held in Kilfinane until the 20th century.
Rev. John Wesley, founder of the Methodist Church, preached here on several occasions between 1765 and 1789. He was invited here by the Palatines Protestants who settled here in 1740 from the Rhine, and were well established in the locality by that time.

A solid sandstone building at the eastern end of Kilfinane, the Bridewell, a local jail consisting of two day-rooms, two yards and four cells. Built in the 1830’s, it was for many years the local headquarters of the Royal Irish Constabulary. It is now a private residence.