Limerick City and County Council regrets to announce that this year’s Limerick St Patrick’s Day Parade and the 50th Limerick International Band Championship have been cancelled due to Covid-19 (Coronavirus) concerns. 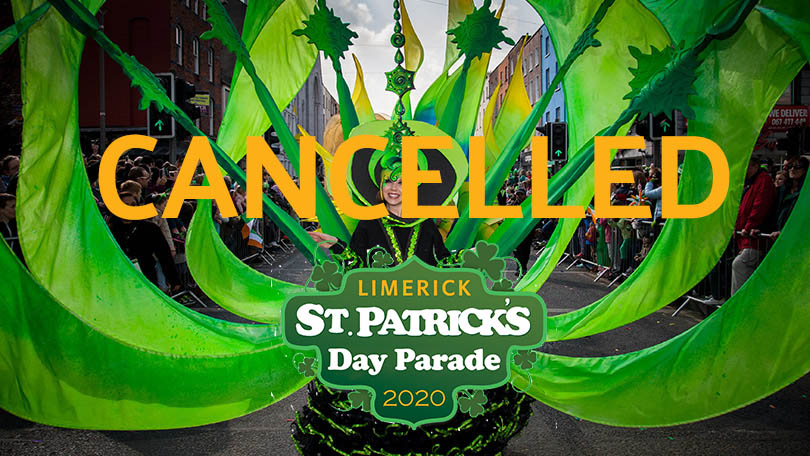 Limerick City and County Council is acutely aware that the Limerick St Patrick’s Festival is one of the civic and tourist highlights of the year in Limerick, however public health and safety have to be paramount.

We would like to apologise to all the clubs, community groups and organisations, bands and street theatre entertainers and businesses affected by this decision but we are following the guidelines set down by the government and health officials and acting in the best interests of public health and safety.

Mayor of the City and County of Limerick Cllr Michael Sheahan said: “We sincerely regret that we have to cancel this year’s Parade and Band Championship but the health and safety of our thousands of participants, visitors and volunteers is paramount. We believe they are the correct decisions based on the current situation and most recent risk assessment which considered the volume of visitors expected to Limerick city and the duration of the event.”

Dr Pat Daly, Chief Executive of Limerick City and County Council added: “Cancellation is not an easy thing to do and this will bring disappointment to many who had been working very hard behind the scenes and were looking forward to marching down O’Connell Street with pride next week, but we have taken this decision due to the possible threat to public health from COVID-19 (coronavirus).”

Several thousand participants had signed up to take part in the Limerick St Patrick’s Day Parade, which attracts up to 50,000 spectators and had a theme of ‘Our Future is Green’.

This year the parade was to be shown live to millions of people across the United States, as the ABC Network and global internet media company Travelzoo were due to broadcast live from Limerick’s O’Connell Street courtesy of Tourism Ireland and Fáilte Ireland.

The 50th International Band Championship has also been cancelled. This was due to take place on Sunday 15 March.

The country’s only marching band championship attracted a total of 20 bands comprising of around 2,000 musicians.

Seven Pipe Bands were due to participate this year including Newcastle West Pipe Band, City of Limerick Pipe Band, the CBS Pipe Band and Boherbuoy Brass and Reed Band.