Twenty-three teams from across the globe will compete in the 2022 World Lacrosse Men’s U21 World Championship from 10 - 20 August 2022 at the University of Limerick. Over 10 days and nights, the best players in the world will face off in approximately 100 games for the right to be crowned world champion.

The international tournament will see the home of the current All-Ireland hurling champions house a new brand of “small ball,” a sport that rivals hurling as “the fastest game on two feet.” This is the first time Ireland will host a World Lacrosse championship. Ireland Lacrosse, the National Governing Body of the sport, is responsible for producing the event in collaboration with World Lacrosse.

Mayor of the City and County of Limerick Cllr Daniel Butler said: “Limerick has embraced the opportunity to host the 2022 World Lacrosse Men’s U21 World Championships. It offers a unique occasion to showcase all that Limerick has to offer as a place to live, work and visit. Hosting large, international sports events produces millions in economic impact for Limerick and underscores the importance of attracting events such as the Men’s U21 Lacrosse World Championship, the Ryder Cup and others here in the future. I encourage local people and businesses to get behind this event and actively support the 2022 World Championship and demonstrate our world-famous hospitality!”

Michael Kennedy, CEO of Ireland Lacrosse and 2022 Event Director, described the importance of hosting the world championship: “This is an incredibly exciting opportunity for Ireland. All eyes will be on Limerick as the world’s best U21 men’s lacrosse players compete for the sport’s highest honour.

“An event of this magnitude and complexity requires incredible partners and tremendous cooperation. We are grateful for the support of Limerick City and County Council, Fáilte Ireland, Shannon Region Conference & Sports Bureau and University of Limerick to help ensure the world championship is the largest and best ever.”

Lacrosse is among the fastest growing team sports in the world. More than 70 countries are members of World Lacrosse, the international governing body, which has grown more than 500% since 2002. Lacrosse aims to feature at the Los Angeles 2028 Olympic Games. 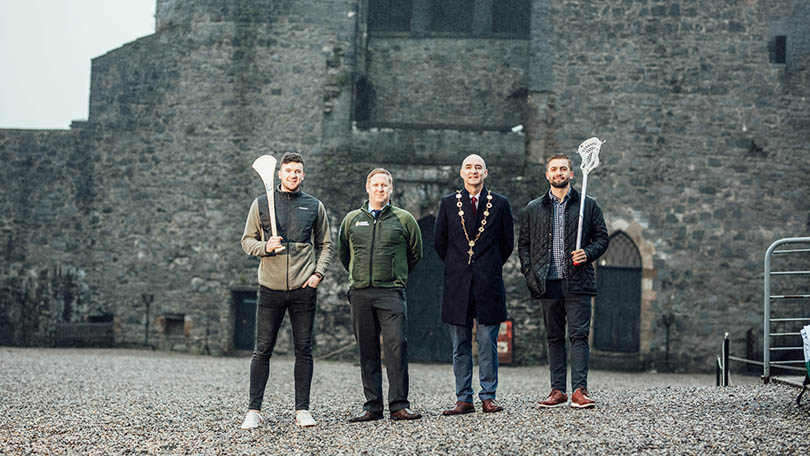 Initially planned for 2020 as a U19 tournament, the world championship was postponed twice due to the pandemic. However, it is now all systems go for the event in 2022. Adding more heft to the event, Ireland Lacrosse will also host a World Festival tournament, concurrent to the Men’s U21 World Championship, with as many as 64 international youth and adult club teams in eight age- and gender-specific divisions.

Margaret Jenkins, Wild Atlantic Way Manager at Fáilte Ireland said: “The announcement that the Men’s U21 Lacrosse World Championship is being hosted in Limerick is a massive boost for the city and county. Sports event participants tend to stay on average 5-7 nights and they often travel with their families at some stage of the trip. This major sporting event will bring thousands of additional visitors to Limerick providing a huge benefit to the local economy, while the international broadcast will promote Limerick, recently designated a Wild Atlantic Way Gateway City, to visitors around the world. Fáilte Ireland will continue to work with the Shannon Region Conference and Sports Bureau to build on the success of this event and attract other major sporting events to Limerick in the future.”

In addition to incredible competition, the world championship will include an interactive FanFest area where fans can participate in games, learn about lacrosse and engage in various fun activities. Corporate sponsorships are available at Presenting, Gold, Silver and Bronze levels. Each package provides ample opportunities for brand exposure, leads generation, merchandise sales, fan engagement and more on an international stage.

Lacrosse is an ancient Native American game originally played to resolve conflicts, heal the sick and prepare warriors for battle. Dubbed the “medicine game,” lacrosse is deeply rooted in Native American spirituality. Ireland has historically had a strong connection with Native Americans – including the Choctaw Nation that donated money to Ireland during the famine – and event organisers are especially looking forward to welcoming the Haudenosaunee Nationals team to the tournament (formerly Iroquois Nationals). Indeed, the Irish team sacrificed its place at the International World Games event taking place in Birmingham, Alabama, USA, this July to ensure the Haudenosaunee team could participate after they were initially excluded due to a lack of recognition of their status as a sovereign nation.

Ireland Lacrosse is the National Governing Body of the sport and is a volunteer-led, non-profit whose mission is to develop the sport of lacrosse throughout the island of Ireland for both men and women and at all levels from youth to adult. Ireland Lacrosse also oversees and manages five Irish national teams – for men and women and at under-age and senior levels – which regularly compete in European and world championship tournaments.