Welcome to the Neighbourhood EcoStraws

One of Limerick’s newest start-ups is offering the perfect stocking filler this Christmas. Ecostraws.ie provides an eco-friendly, high quality, fun alternative to the plastic drinking straw with all products priced under €10.

Inspiration for the new venture came when the three founders attended the National Geographic Symphony for our World concert in Limerick earlier this year and decided to act as a result. Brian O’Callaghan, Anthony Egan and Sarah Keyes said the shocking realisation of the damage humans are causing to the planet spurred them into action.

The team supply many different types of eco-friendly reusable straws and 100% biodegradable disposable straws, both online and also every Saturday from their stall at the Limerick Milk Market.

“Since we started at the Market a few weeks ago, the response, both from the general public and from fellow traders has been phenomenal”, said co-founder Brian O’Callaghan.

“The Milk Market has acted as a launch pad for businesses such as Harpers, The Green Apron, Wellnice Pops, and many more, and I am hopeful it will help us spread our message too.” 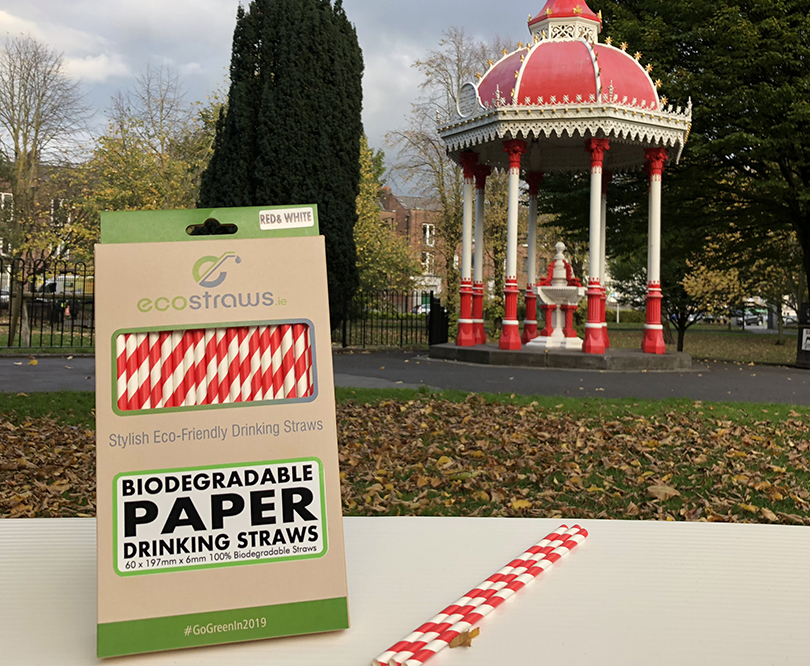 Research has shown that Ireland uses approximately one million plastic straws every day. Plastic drinking straws are recorded as being one of the top 10 pieces of debris found on our beaches. These pieces get ingested by marine and land animals, and ultimately, by us.

Ecostraws.ie have over 70 products listed on their website and are targeting both the domestic market and the trade market.

“Our stock of top quality, well priced, reusable eco-friendly straws including stainless steel, glass, bamboo and silicone are proving to be huge hits with the domestic market as householders include them in their cutlery drawer,” continued Brian.

“Pubs and cafés who wish to promote their eco credentials are our biggest customers for paper, CPLA and edible straws. These straws are sourced from 100% natural materials, which means they are completely biodegradable. Thankfully we have a very proactive hospitality sector here in Limerick, and the support we have received since launch has been phenomenal,” said Brian.

Ecostraws.ie launched just two weeks after the European Parliament voted overwhelmingly to ban single use plastics by 2021. Straws, cutlery, cotton buds and balloon sticks all fall under this umbrella and account for 70% of the waste on our beaches.

The Ecostraws.ie team were delighted with the ruling, explained Brian: “We did anticipate a ruling was on the cards. It follows similar rulings in some states of America and territories in Australia. Also, in January of this year, China stopped accepting European waste for disposal, so we had no choice but to stand on our own two feet with regard to single use plastic waste and pollution. That said, it was somewhat of a coincidence the ruling from the European Parliament and the launch of Ecostraws.ie coincided so eloquently.”

This small team see themselves as having a unique business and they claim to have the credentials to progress. “We believe that we are at the beginning of a revolution against single use plastics and that Ecostraws.ie is ahead of the curve. Our ultimate goal is to become the number one supplier of eco-friendly drinking straws in Ireland, Europe, and across the globe, thus doing our bit in the fight against plastic pollution,” concluded Brian.