Are you an Entrepreneur with an idea?

Phase One of the 2018 New Frontiers Programme at Limerick Institute of Technology is taking applications now.

The New Frontiers team at the Hartnett Centre is ready to work with 'entrepreneurs with ideas' and this 2018 cycle is the seventh to be run at LIT. It builds on the success of previous groups: Mark Cochrane, Leonie Lynch and Shane Ryan are some of the 2016 alumni who used the New Frontiers programme to accelerate their companies’ launches. Mark’s company TrackPlan, which provides 'beautiful Computer-Aided Facilities Management software that you can trust' is growing rapidly around the globe. Leonie Lynch is about to officially launch her startup, Juspy. Juspy is developing a portfolio of specialist food products and formulations for women in various life stages, starting with Momme, a high protein postnatal recovery drink for the new mother. Shane has been named in the Sunday Business Post’s '100 Hot Start-ups'. His start up, Feed produces delicious plant-based meal pots that are already being stocked by stores such as Dunnes and SuperValu.

New Frontiers was designed by Enterprise Ireland to support ambitious entrepreneurs who are capable of creating sustainable new businesses and jobs. If you have an innovative business idea and are planning to establish and run your own company (or if you know of someone who is), the New Frontiers Programme can provide you with funding, skills and contacts to accelerate your business development to market launch.

The programme is run at LIT’s Hartnett Centre, where the 2017 participants are approaching the end of Phase 2. The group includes one entrepreneur who is realising a life-long ambition to bring a product to market. Two have new ventures based on apps, one who is creating a new way to buy products online using AR, and another who has launched a new taxi-hailing app that enables cashless and card-less payment of the fare. Another is about to launch a tool that will enable developers to produce embedded operating systems for 'internet of things' applications in a fraction of the time it would otherwise take and another a 'meeting place' where fin-tech start-ups, investors and corporations can come together and build partnerships.

The group includes two former senior MNC managers, one who is following his dream of launching a new Financial Service that uses smart trend analysis software to assure returns from investments by more quickly availing of market ups and downs. The other is leading a high growth/high tech start-up, a new medical devices company that will address Urinary Tract Infections and the wider urology segment. Its first product is about to begin trials. One of the group is executing the Disruptive Innovation Model to evolve from an “Independent” game developer to an international AAA game company.

Another intends to create an on-line, on-demand business in the huge Car Maintenance market, while another has created a system he believes will revolutionize the building industry, starting with the next generation of greenhouses for vertical horticulture.

Another draws on the cameras of fans attending an event to bring footage into an editing suite where commentary and on-screen information are added for streaming to fans not attending the event. 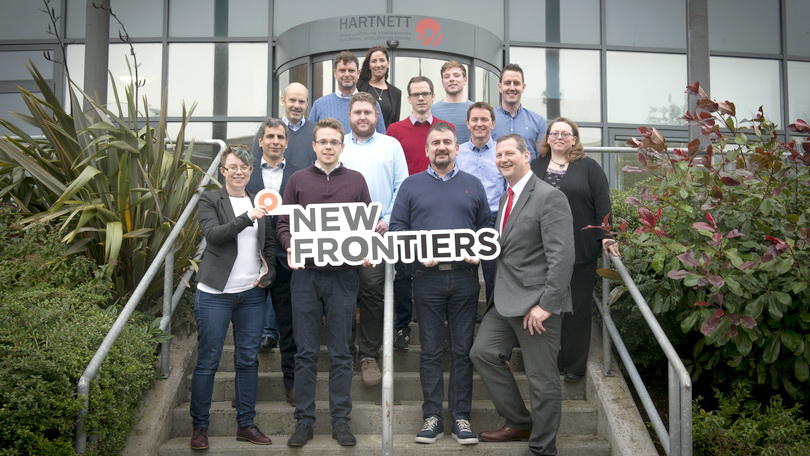 New Frontiers is a three-phase programme, designed to provide an integrated and comprehensive set of business development supports to participants.

Phase 1 is a series of evening sessions designed to help you to what it takes to establish if your idea is a viable one or not. At the end of Phase 1, if you have a viable business proposition, you may compete for a place on Phase 2.

The aim of Phase 1 is to establish if your idea can be turned into a viable business proposition.

Phase 2 is a six-month intensive programme demanding full-time commitment. To facilitate this, you will receive a stipend of €15,000, subject to satisfactory performance reviews. At the end of this phase, you can expect to have your business investor-ready and about to launch on the market.

Phase 3 affords you the opportunity to establish your business and develop your client base. Business advisers will guide you to other supports for your business.

The programme at LIT is devised and administered by Gillian Barry, Simon O’Keeffe and Mary Casey, along with external trainers and mentors. To apply to the New Frontiers programme visit www.hartnettcentre.ie/newfrontiers to access the online application form. Mary is always available at Mary.Casey@LIT.ie +353 (61) 293830 to help anyone who wants to see if entrepreneurship is for them and to get the best help and funding to develop a new business. Mary and Simon are looking forward to working with this year’s participants.